Ivanka Fields 'Inappropriate' Question About Her Father During NBC Interview 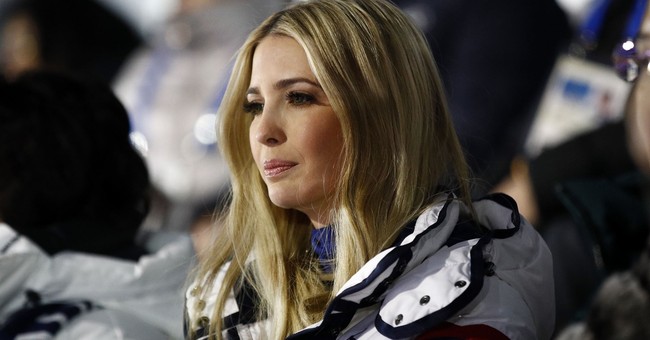 First Daughter Ivanka Trump seemed caught off guard by a question about her dad during her sit down interview with NBC News's Peter Alexander, which aired Monday.

They discussed the Olympics, and what steps to take in the wake of the school shooting in Parkland, Florida - topics she was comfortable discussing. But, when Alexander asked the First Daughter about the sexual assault allegations looming over her father, she said the conversation had taken an "inappropriate" turn.

“I think it’s a pretty inappropriate question to ask a daughter if she believes the accusers of her father when he’s affirmatively stated there’s no truth to it," she said.

Clearly, Trump was not amused by the question, but she answered it.

“Do you believe your father’s [sexual misconduct] accusers?” -@PeterAlexander

“I think it’s a pretty inappropriate question to ask a daughter if she believes the accusers of her father when he’s affirmatively stated there’s no truth to it.” -@IvankaTrump pic.twitter.com/23AVPgcOdE

She didn't say the name, but pundits mused that one of those "daughters" Ivanka was alluding to was Chelsea Clinton, whose father Bill Clinton had an affair during his presidency with intern Monica Lewinsky.

CNN analysts disagreed with the First Daughter on Monday, arguing that the question was justified because she is a member of the administration.

"If Chelsea was a senior adviser to the president," she'd be asked the same thing, the CNN panel suggested.

Ivanka was part of the U.S. delegation at the Pyeongchang Winter Olympics closing ceremony on Sunday. Her presence there was received with mixed reactions from the athletes, some welcoming her with open arms and others cursing her out.