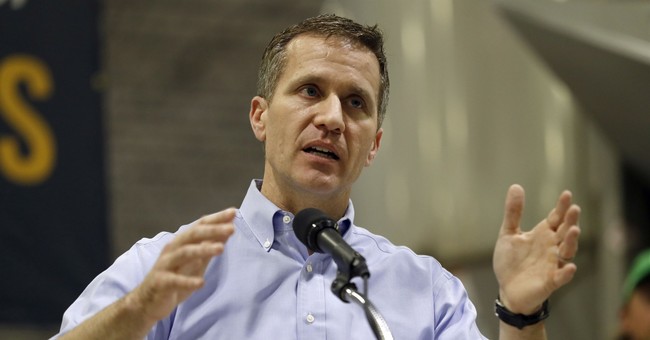 Missouri Gov. Eric Greitens (R) was accused of having an affair with a married woman in 2015. He reportedly blackmailed the mistress in question, threatening to release nude photos of her, to keep her quiet. He admitted to the relationship, but not the blackmail.

On Thursday, he was indicted in St. Louis on a first-degree felony invasion of privacy.

In a statement following the ruling, Greitens admits his "personal mistake," but stood by his denial of the blackmail charge. He also referred to the prosecutor, Circuit Attorney Kimberly Gardner, as a "reckless liberal."

The details into the charges are disturbing.

The recording alleges that Greitens invited the woman to his home and the sexual encounter was consensual.

In the tape, the woman claims the governor asked her to "come downstairs" at his home where he would show her "how to do a proper pull-up."

The woman alleges he then taped her hands, blindfolded her, took a partially nude photo of her and then warned her to stay quite about the sexual encounter.

The Democratic Governors Association called for Greitens to resign, and the Missouri Senate Republicans find the allegations "shocking and concerning."

Missouri leadership said they started an investigation into the incident.

"The people of Missouri deserve no less," Missouri House Speaker Todd Richardson, Floor Leader Rob Vescovo and Speaker Pro Tem Elijah Haahr said in a statement. "We will begin the process of tasking a group of legislators to investigate these serious charges."