Heartbreaking: Student Tells 'TODAY' Anchors How Her Best Friend Was Shot and Killed Right Next to Her 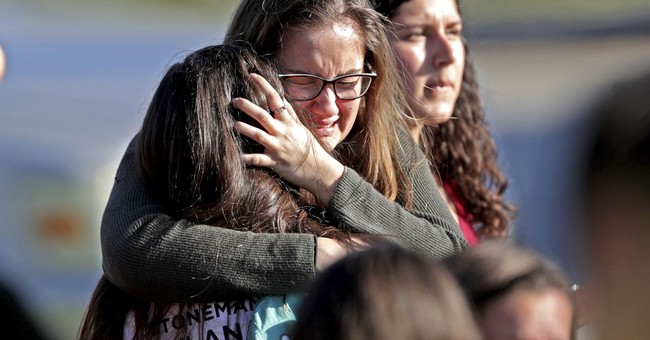 Interviews don't get much more heartbreaking than this. A 19-year-old gunman shot and killed 17 people at Marjory Stoneman Douglas High School in Parkland, FL Wednesday. One of those victims was Samantha Grady's best friend. Amazingly, Grady found the courage to share her story live on air with the "TODAY" show Thursday morning.

Absolutely heartbreaking. Florida shooting survivor Samantha Grady tells @hodakotb and @savannahguthrie her best friend was shot right next to her and did not survive pic.twitter.com/eTlQlJb3op

"Unfortunately, she didn't make it," Grady said of her friend, while trying to fight back tears.

The young lady went on to explain that although their classroom was locked, the shooter was able to shoot through the glass.

Before she was hit, her friend instructed her to take a book and use it as a shield.

“We were already situated by the book shelf," Grady explained. "She was like, ‘Grab a book, grab a book,’ and so I took a book. It was a tiny book, but I took a book and I held it up. I believe, maybe, the book kind of deterred some of the bullets, so it didn’t hit me so badly,” she said. “She was the one who gave me the idea. She definitely helped me a lot.”

Anchors Savannah Guthrie and Hoda Kotb gently asked if Grady, who herself was injured, was okay and told her they were sending her "love and prayers."

Social media users scolded NBC for bringing Grady on air for an interview in the middle of her grief, calling the producers "insensitive" for using the young lady for ratings. But, Grady explained that it helps to share her story and not internalize it because she "didn't want to have nightmares."