Gowdy Muses Why the Dems Want Their Memo to Be Redacted 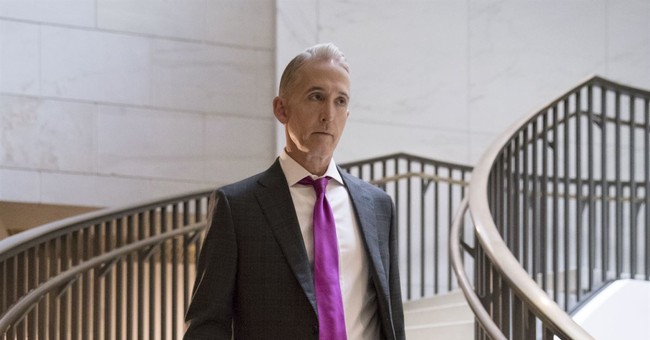 Rep. Trey Gowdy (R-SC) has credited his Democratic colleagues with being politically savvy enough to include material that needs to be redacted in their anticipated memo on FBI abuses. It is a counter document to the one Republicans released last week suggesting the agency violated FISA to spy on Trump campaign workers.

Having redactions in their response memo, Gowdy told Fox News Tuesday night, would paint a narrative that there is a more sinister story to be told.

.@TGowdySC: "I think the Democrats are politically smart enough to put things in the memo that require either the [@FBI] or @TheJusticeDept to say it needs to be [redacted]. Therefore, it creates this belief that there's something being hidden from the American people." #TheStory pic.twitter.com/3WGoGp7G7J

Gowdy said the initial FISA memo does demand accountability at the FBI, but he distanced himself from the president's suggestion that the document undercuts special counsel Robert Mueller's Russia investigation, reiterating his confidence in the majority of the men and women who serve at the FBI and DOJ.

While this memo raises serious concerns with the FISA process, I have been and remain confident in the overwhelming majority of the men and women serving at the FBI and DOJ.

Gowdy didn't go so far as some of his fellow Republicans to suggest the agencies were conspiring against Trump, but he did note their sheer incompetence.

"I never allege a conspiracy when simple incompetence will suffice as an explanation," he said.

Gowdy announced his retirement from Congress last week. In his sitdown with Fox, he reminisced on his most memorable "grillings" of Washington bureaucrats.