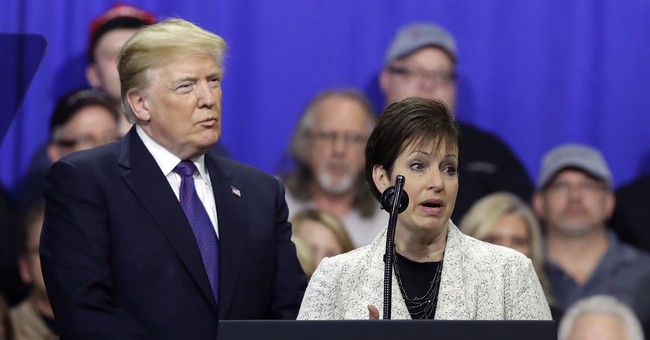 President Trump invited a few employees on stage during his speech about the Tax Cuts and Jobs Act in Ohio Monday. He asked them to share a bit about what they are going to do with the money they're saving from the new tax cuts. One man said he's going to use his $1,000 bonus to start a family. Another woman who is getting a tax cut said it will help her and her husband buy a house and pay for their children's college education. It will, she said, help them "make ends meet."

MSNBC's Katy Tur was not so sure. On Twitter, she shared some statistics that cast doubt on these Americans' hopeful expectations.

Woman who just spoke says she's going to use her $1,000 bonus and tax cut to help buy a home and pay for her two kids who are going to college.

Almost instantly, Tur was criticized for her out-of-touch analysis.

This is some monumentally absurd, condescending analysis.

If you got $1,000 and chose to save it, it would absolutely help with a future purchase, starting a family, or college tuition for kids. It doesn’t PAY for it, and no one thinks it does. https://t.co/r4DX5l3ytf

"Tur probably thinks of this as a “factcheck,” but it’s actually a reality check about what seems to be her wild ignorance of common American household expenses," The Federalist wrote.

To sum up their critiques, isn't a little help better than no help at all?

Sadly, Tur's sentiments are shared with leaders of the Democratic Party. House Minority Leader Nancy Pelosi keeps dismissing employee bonuses as "crumbs." Perhaps that's why she, along with her colleagues, remained seated at President Trump's State of the Union address when he was touting the growing economy. The Republican National Committee is already making her pay for their choice to remain seated with a brutal video entitled, "Democrats: What Do You Stand For?"

RNC Chairwoman Ronna McDaniel told WMAL radio host Vince Coglianese that it's no surprise Pelosi can't relate to the everyday American receiving a tax cut because she represents the elite.

"Well, Nancy Pelosi represents where the Democrat Party has gone," McDaniel said Tuesday. "They now represent the elite – she is a millionaire from San Francisco – they are completely out of touch with what a thousand dollar bonus means to many people in this country who are living paycheck to paycheck."

Former Hillary Clinton campaign manager Robby Mook admitted on CNN Monday that the bonuses will give the middle class "a little bit of money," but it's slim pickings compared to the benefits corporations are getting.