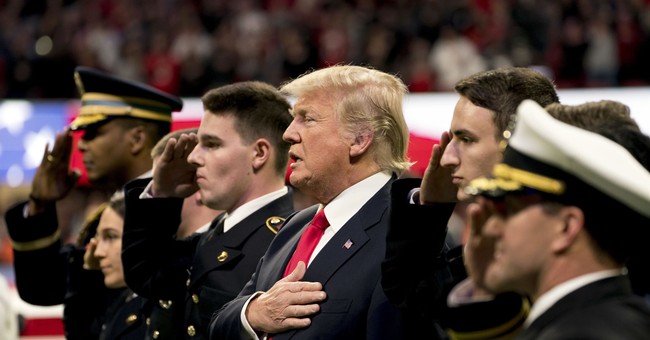 President Trump attended Monday night's stunner of a college football championship Monday night between the University of Georgia and the University of Alabama, which was played in Atlanta. Most everyone is talking about that wild ending. Except the political news world - they're talking about how the president appeared to forget the words to the national anthem at the start of the game.

Did @realDonaldTrump forget the words to the US national anthem?https://t.co/Gny2cIgm7H pic.twitter.com/6oFvVk21IP

The Daily Mail wondered the same thing, only they mused if his supposedly forgetting the lyrics was another sign of dementia.

Trump has been very vocal about the importance of honoring the flag and standing during the playing of the anthem, even calling NFL players who disrespect Old Glory "SOBs."

The reports that our president doesn't know the anthem lyrics come as Trump is still fielding questions about his mental fitness following the release of the controversial book "Fire and Fury." Author Michael Wolff insists "100 percent" of the people he spoke with said Trump was not fit for office. Since its release, the author has admitted that he takes some liberties with his writing. To their credit, some media pundits have called him out on his many untruths. Trump denies ever speaking to Wolff about the book and rejects its contents.

In case you missed last night's game, here's how Alabama clinched it.

In case you missed it. Here's Amite's Devonta Smith with Alabama's game-winning touchdown catch in the National Championship. @Smityyy03 pic.twitter.com/JrKaOdCTai