Tax Reform Has Passed the House 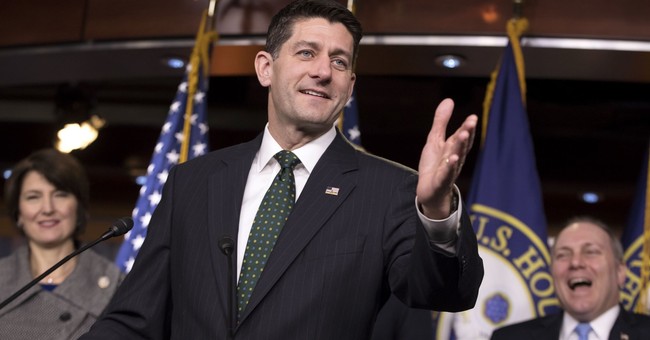 UPDATE: Democrats are arguing that three provisions of the tax bill violate Senate rules. If true, the House will have to vote again once it's approved by the Senate.

UPDATE: President Trump has congratulated the GOP on its successful vote.

The House of Representatives has passed the GOP tax bill by a vote of 227 to 203.

"This is a day I have been looking forward to for a long time," House Speaker Paul Ryan said ahead of the vote, praising his colleagues for efforts, especially Ways and Means Chairman Kevin Brady. "Today we are giving the people of this country their money back."

Ryan's remarks were interrupted by hecklers at one point, before he continued to explain the GOP plan's benefits.

For years, the powers-that-be in Washington have told you: just hand over more freedom to unelected bureaucrats, and it will be okay. There’s your scam right there. Republicans know, given the opportunity, there are no limits to what Americans can do. pic.twitter.com/u2zJTFFjSu

The $1.5 trillion plan nearly doubles the standard deduction for taxpayers, and lowers the corporate tax rate from 35 to 21 percent. Every Democrat voted against it, as did the following 12 Republicans.

Every Democrat and 12 Republicans voted no on the tax bill. The full list: https://t.co/uz1UYqpyvf pic.twitter.com/CW9huUmk5l

Critics say the plan unfairly benefits the rich. Yet, even left leaning organizations admit that the plan will usher in tax cuts for 80 percent of the American people. The average tax cut will be $1,600.

Protesters who showed up to the vote could be heard chanting, "kill the bill, don't kill us."

One angry woman apparently took her top off.

House protesters gone wild: woman takes her top off in the gallery of the House protesting tax vote.

Not your typical day on Capitol Hill.

Some, like Minority Leader Nancy Pelosi, didn't even bat an eye when they called it "armaggedon." She revisited that same narrative on Tuesday, saying the tax reform bill introduced by the Republicans was the "worst bill" she's ever seen on the House floor. Former Obama economic adviser Austan Goolsbee said the bill was equal to getting away with murder, noting that the bill's benefits are not permanent.

Because Americans have been "bamboozled" (as Guy put it) into believing these falsehoods, it can account for why a new Monmouth poll showed only 26 percent of Americans approve of the tax reform plan.

If the tax plan becomes law, Americans think their taxes will:
50% Go up
14% Go down
25% Stay the samehttps://t.co/EFrifF2mHD

Next stop: the Senate.

Sen. Marco Rubio (R-FL) surprised colleagues last week when he said he couldn't support the bill in its current form because he wasn't satisfied with the child tax credit. His plea was heard - the refundable portion of child tax credit went from $1,100 to $1,400. Rubio called it a solid step forward and announced he was now on board.

Sen. John McCain (R-AZ) will not be present for the vote because he is seeking treatment for brain cancer.

Still, the plan is expected to pass because the Republicans can afford to lose two votes. Three even, with Vice President Mike Pence sweeping in for the deciding vote.