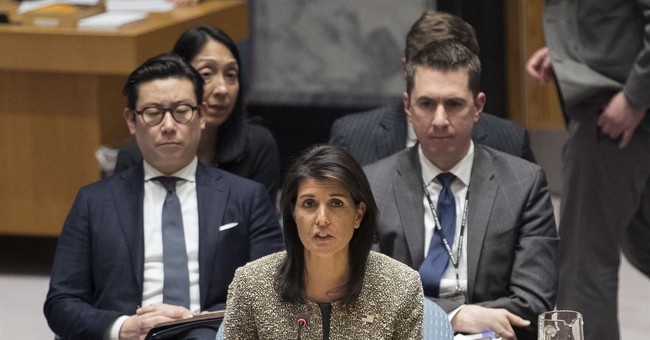 “The United States will not stand by as Israel is unfairly attacked in the United Nations and by countries that have proven their disregard for Israel’s national security,” Ambassador Nikki Haley declared at an emergency meeting at the United Nations Friday.

She took part in the meeting, which was convened just hours after President Trump announced the U.S. embassy in Israel would be moving from Tel Aviv to Jerusalem.

Jerusalem, Haley said, is the capital of Israel. Yet, the U.S. has not taken sides on the border issue.

.@USUN Ambassador Nikki Haley: We are more committed to the cause of Israeli-Palestinian peace today than we’ve ever been before. And we believe we might be closer to that goal than ever before. pic.twitter.com/X3zSJ0ZxnL

"The specific dimensions of sovereignty over Jerusalem are still to be decided by the Israelis and Palestinians in negotiations," Haley said.

The U.S. is "committed" to finding a lasting peace agreement.

“Jerusalem should be the shared capital of a resulting two-state solution," the United Kingdom said. "We therefore disagree with the United States’ decision to recognize Jerusalem as Israel’s capital.”

Other member nations echoed that sentiment.

In 2 years of covering @UN, never seen all 14 members of #UNSC unanimously condemn the actions/decisions of another member as they are doing w/#US #Jerusalem today.

When it was her turn to speak, Haley took a few moments to criticize the UN for its history of anti-Israel agendas.

"Over many years, the UN has been the foremost center of hostility toward Israel," she said. Their behavior, she added, has harmed more than advanced the Middle East peace process.

As critics continue to publicly criticize Trump's decision, he put out a tweet this morning that spoke for itself. His predecessors promised to move the embassy, but he is the only one who actually followed through.