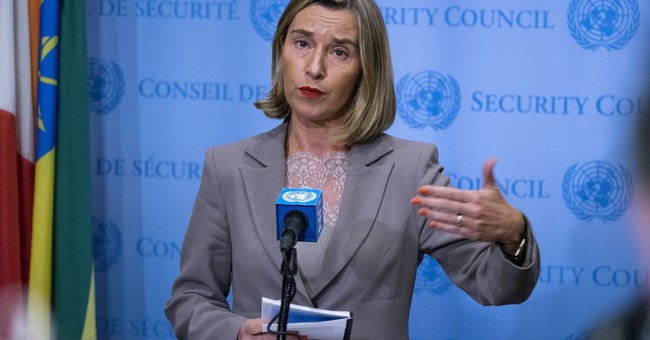 The European Union has put out an unsurprising statement condemning President Trump's decision to move the U.S. embassy in Israel from Tel Aviv to Jerusalem and recognize it as the Israeli capital. Supporters say Trump is simply enforcing a "reality," but critics like the EU worry what repercussions the move will have on the Israeli-Palestinian peace process.

"The European Union expresses serious concern about today’s announcement by the United States President Trump on Jerusalem and the repercussions this may have on the prospect of peace," EU Foreign Affairs Chief Federica Mogherini said in a statement. "The EU position remains unchanged. The aspirations of both parties must be fulfilled and a way must be found through negotiations to resolve the status of Jerusalem as the future capital of both states."

The EU is committed to a two-state solution in the region and urges that Jerusalem be shared as a capital between Israel and the Palestinians, Mogherini said.

Several dignitaries have also warned Trump against recognizing Jerusalem as Israel's capital and Hamas is planning a "day of rage" in protest. Israeli Prime Minister Benjamin Netanyahu, however, is grateful for Trump's announcement.

As Katie has noted, U.S. presidents have considered moving the embassy to Jerusalem for decades. As Guy noted, some Democrats who are now decrying the decision have themselves voted for it numerous times.

Building a new embassy in Jerusalem could take years, especially considering the political ramifications. The U.S. will be the only country to have an embassy stationed in the city.