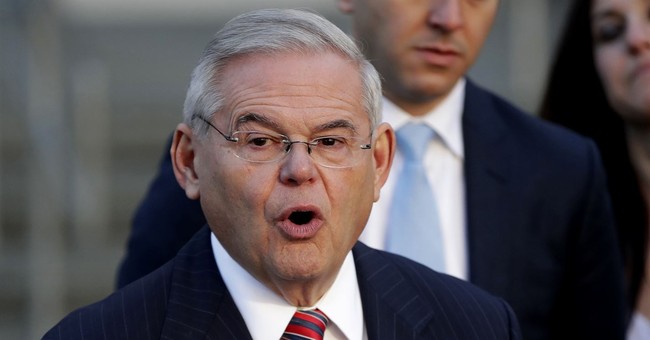 Sen. Bob Menendez (D-NJ) may have eluded jail time after the jury in his corruption case ended in a mistrial, but New Jersey voters may not be so forgiving come Election Day.

Menendez was in court after being indicted on several federal bribery charges. He reportedly took advantage of his office to help an ophthalmologist friend, who in turn gifted him $700,000 in campaign contributions.

Thanks to his immoral actions, Menendez appears to have himself a Senate challenger.

"U.S. senators are supposed to serve the people, not themselves," Michael Starr Hopkins writes in an op-ed for The Hill.

Hopkins served as a public defender before going to work on both the Barack Obama and Hillary Clinton presidential campaigns. He's "exploring" a Senate bid, he says, because New Jersey deserves a "fresh start." How can Democrats expect to win over voters if they are championing a politician with such a tainted record?

The senator may have narrowly evaded prison with a mistrial, but voters aren’t going to forget what he’s done. Menendez has the lowest approval rating in the entire U.S. Senate, at 32 percent. The jury couldn’t make up its mind, but the people of New Jersey clearly have. Democrats don’t have a single vote to lose in the Senate, and we can’t afford to put this seat at risk by running a candidate who has clearly lost the people’s trust.

Hopkins suggested that critics will say he is too young to run, but he simply can't wait.

"I can no longer stand on the sidelines and watch the country that I love flounder under morally and ethically corrupt leadership."

Should Menendez go through with his re-election campaign, his corruption case is unlikely to be forgotten. Senate Majority Leader Mitch McConnell is calling for an ethics probe against the New Jersey Democrat, who is one of just a dozen senators to be indicted in U.S. history. In September, a Quinnipiac poll found that half of New Jersey voters believe he doesn't deserve another term. His approval rating? The lowest in a decade.