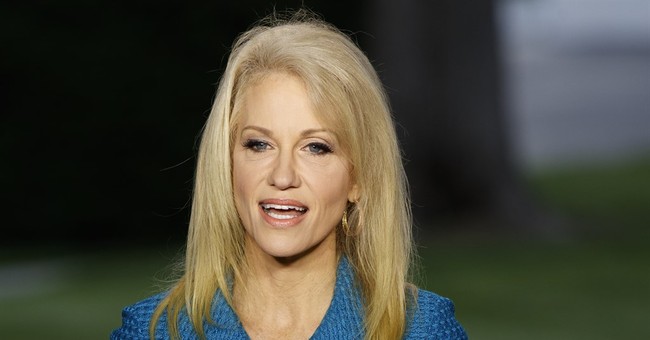 Alabama Republican Senate candidate Roy Moore is trying to bat off allegations that he sexually abused minors when he was in his 30s. Both President Trump and White House senior advisor Kellyanne Conway, while not explicitly endorsing Moore, are, however, warning Alabamans not to vote for his opponent, Democrat Doug Jones, who they say will ruin the economy and be terrible for national security.

Trump called Jones a "disaster," while Conway referred to him as a classic "doctrinaire liberal" on "Fox & Friends."

"Well, to quote Ivanka Trump - who I never quote - there's a special place in hell for mothers who defend accused child molesters, and that would be Kellyanne Conway," Rubin said on MSNBC Saturday. "I have no words to describe how, really, atrocious, how despicable this is."

Neither did she have words, it seems, for the growing number of Democrats now embroiled in their own sexual misconduct scandals - Sen. Al Franken (D-MN) and Rep. John Conyers (D-MI) being the most recent. Instead of strongly condemning their actions and demanding their resignations, top Democrats like Nancy Pelosi are defending them as "icons." Par for the course. Sen. Ted Kennedy, whose negligence killed a young woman in a car accident in 1969, was lauded by Democrats at the 2012 Democratic National Convention.

Never mind that, Rubin only had her judgmental eyes on the Republicans.

I do want to differ with Kurt (Bardella) in that he sees this noxious branch of the Republican party as a segment. Unfortunately, I think that is the Republican party. You can't kind of pass them off as some fringe group when it's the President of the United States, everybody in the White House, the head of the RNC, the Vice President of the United States. We can go down the line.

And let's face it. The party has already embraced someone who has been serially accused of sexual assault, that's the President. That's Paul Ryan. That's Mitch McConnell. That's everybody. So, listen, to make this distinction that somehow there are good Republicans on this issue and bad Republicans. This is the horror of Donald Trump which he has infested and deformed an entire national political party. And I think they're rotten to the core now, the whole lot of them.

This is all coming from one of the Washington Post's "conservative" voices.