One NFL Player Knelt on Thanksgiving 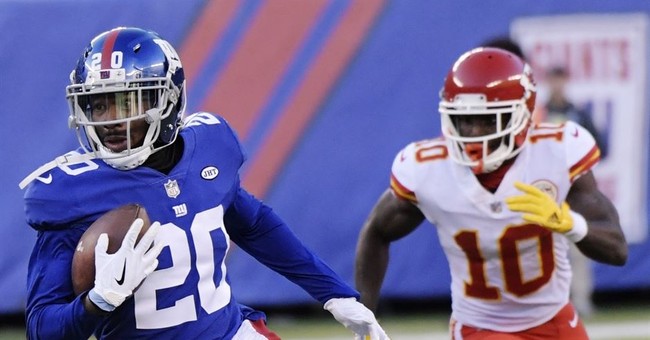 Many football fans were not so thankful for New York Giants player Olivier Vernon on Thursday. The defensive end, who has been kneeling during the national anthem for weeks, warned fans in an interview Newsday earlier this season that he would probably not be stopping his protest for the holidays.

“What it would take for me to stand is if people can understand what the whole message is behind it,” he told Newsday. “That would actually help a whole lot, but everybody doesn’t see things that way and tries to distort what the message was from the beginning, which is basically social injustice on African-Americans and police brutality.”

Is the sky blue.

Can you believe that the disrespect for our Country, our Flag, our Anthem continues without penalty to the players. The Commissioner has lost control of the hemorrhaging league. Players are the boss! https://t.co/udXP5MR8BC

On Wednesday, Trump asked when "highly paid Commissioner" Roger Goodell would "finally get tough and smart" on the issue, because it is "killing" the league.

He may be right, considering the steep decline in ratings from last year - and it's just getting worse. The league has lost 1 million viewers in comparison to last year’s average at this point in the season.

Last week, Trump had a close eye on Oakland Raiders player Marshawn Lynch. The president shared some very candid thoughts about Lynch's decision to kneel for the U.S. anthem, but stand for the Mexican national anthem.

The Giants ended up losing Thursday's game against the Washington Redskins 20-10.