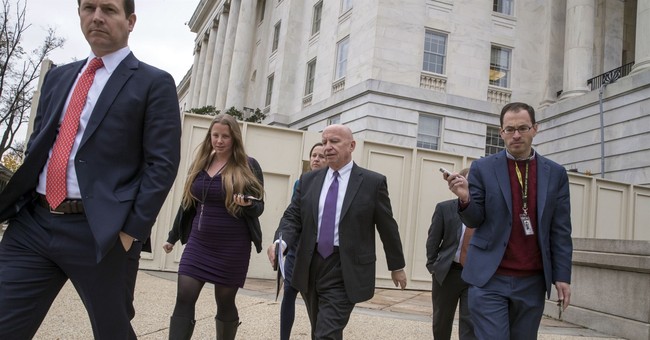 UPDATE: The House Ways and Means Committee has voted the tax reform plan out of committee.

President Trump won't like some changes that have reportedly been made to the Senate GOP's tax reform bill, expected to be released Thursday. For one, the Republican plan is now reportedly delaying the implementation of the lower corporate tax rate - from 35 percent to 20 percent - until 2019. Trump wanted it implemented as soon as possible.

At least some Republicans agree with the president, chiding their colleagues for staging this "gimmick" of a delay.

Furthermore, the Senate bill apparently will not include the repeal of the Obamacare individual mandate. Including the provision, Republicans charge, will just open another controversial can of worms. Considering how poorly their prior health care effort went, they fear that trying to touch the Obamacare mandate will make it harder to pass tax reform.

Trump had been pushing for repeal to be part of the tax reform bill.

The provision may, however, may be added to the Ways and Means Committee version of the bill, Politico notes.

CNBC has published a list of specifics in the new Senate bill and how it differs from the House version. For instance, the Senate bill contains seven different tax rates, while the House version reduces the number of income tax brackets to three. The Senate version doubles the exemption for the "death tax" without eliminating it. The House plan repeals the estate tax after six years.

Why BLM Co-founder Is Being Branded a 'Fraud' After Latest Real Estate Purchase
Townhall
'How DARE you say my OWN is decided by the color of my skin': Calvin Robinson takes on activist Ken Hinds in EPIC debate (watch)
Twitchy
Greg Gutfeld Muscles in on the Ratings of Late Night Talk Shows
Redstate
Trump Vindicated as Judge Rules Michigan Secretary of State Violated Election Laws
PJ Media