Flake Agrees He Wouldn't Be Able to Win a Republican Primary 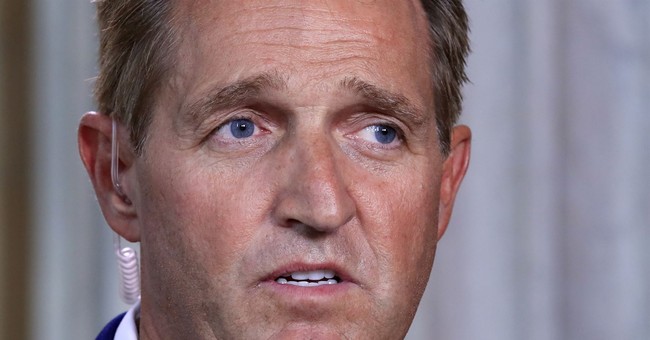 When Sen. Jeff Flake (R-AZ) announced Tuesday that he would not be running for re-election, President Trump tweeted that's because he had no chance of winning.

The reason Flake and Corker dropped out of the Senate race is very simple, they had zero chance of being elected. Now act so hurt & wounded!

In an appearance on "Morning Joe" Wednesday, Flake actually agreed with the president - via an insult.

The bottom is, if I were to run a campaign that I could be proud of, and where I didn't have to cozy up to the president in his positions or his behavior, I could not win in a Republican primary. That's the bottom line.

Flake added that it's wrong for Republicans to perceive any criticism of Trump as somehow something that's "not conservative." It's "got to change," he says, and he's going to continue to speak out.

Trump has been at odds with Flake ever since the senator has started accusing him of jeopardizing the Republican Party's principles.

The White House was not thrilled with the tone Flake took during his retirement announcement on the Senate floor. In the speech, the senator regretted "the indecency of our discourse" and the "reckless provocations." His words were of course perceived as an attack on the president, considering his recent condemnations of Trump. At Tuesday's press briefing, White House Press Secretary Sarah Huckabee Sanders said Americans weren't interested in such "petty" comments and warned the senator, as well as an equally outspoken Sen. Bob Corker (R-TN), that Trump is ready to "hit back."

Flake is getting no love from the White House, but he's getting plenty from the media.

CNN's Chris Cilliza hailed Flake's retirement speech as "the most important speech of 2017." MSNBC's Kasie Hunt echoed that sentiment, saying it will "end up in the history books." She also said Flake represented "the human decency" wing of the GOP.  The New York Times praised his "defiant surrender."

They'll be happy to know Flake has not ruled out a presidential run in 2020.