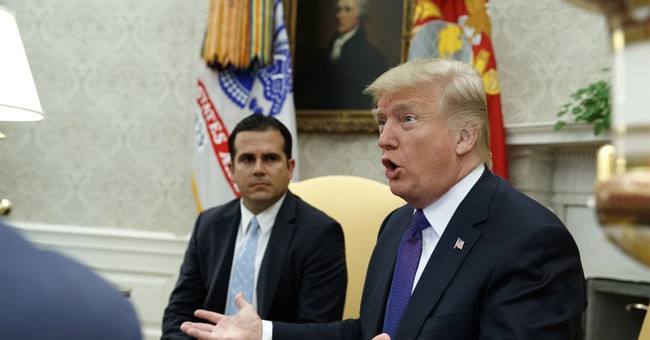 President Trump met with Puerto Rican Gov. Ricardo Rosselló Thursday at the White House for an in depth discussion about how the two could work together to get Puerto Rico the resources it needs to recover from Hurricane Maria.

Asked by the media, who have been critical of Trump for being too slow to help Puerto Ricans, Trump gave the federal response a 10 out of 10.

It's true some aid in Puerto Rico has been slow to arrive in the right hands, but that is reportedly due to mismanagement and government corruption.

Trump was asked about a host of other issues at his meeting with Rosselló, including reports that Russia has 20 percent of U.S. uranium. That, the president told the press in the room, is "the real Russia story."

It's "one of the big stories of the decade," he mused.

"The problem is that the mainstream media does not want to cover that story because that affects people that they protect," he continued. "So they don’t like covering that story. But the big story is uranium and how Russia got 20 percent of our uranium. Frankly, it’s a disgrace. It’s a disgrace. And it’s a disgrace that the fake news won cover it. It’s so sad."

He was echoing sentiments he made on Twitter earlier in the day.

In 2010, President Obama approved a uranium deal with a Russian company despite potential conflicts of interest with secretary of state Hillary Clinton. The deal, Uranium One, gave the Russians control of part of the U.S. uranium supply and was thought to have benefitted the Clinton Foundation.