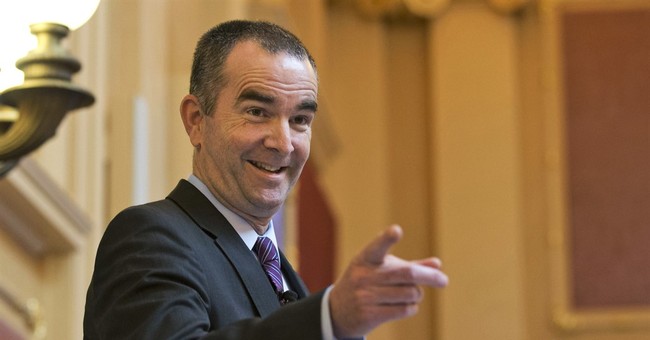 The National Rifle Association's national headquarters is stationed in Fairfax, VA. Proud gun owners show up every day to exercise their Second Amendment rights. I wonder, then, how they feel about the Democratic candidate for governor and current Lt. Gov. Ralph Northam bragging about getting an 'F' rating from the gun rights group.

A study in contrasts:

The @NRA is spending $1 million on Ed Gillespie's behalf.

Meanwhile, Ralph is proud of his F-rating. #VAGovDebate

The Democrat tweeted the message the night of his third and final gubernatorial debate with his Republican opponent Ed Gillespie.

Northam, in addition to flaunting his failing NRA grade, has also voiced his desire to ban bump stocks, high capacity magazines, and enhance background checks. In recent surveys, Virginians too have come down on the side of background checks.

He is making his opponent out to be some right wing, gun nut. Gillespie has the NRA's endorsement, but he has shown he has plenty of bipartisan bones in his body and is willing to endorse some moderate regulations in the wake of the horrifying Las Vegas attack. For instance, the Republican has indicated he too is willing to support a ban on bump stock devices, which can turn semiautomatic weapons into automatic ones.

"And so as we are learning more about this horrific act of evil in Las Vegas, to me, as I learned about bump stocks and what they do it makes sense to me to take action in this regard," the statement read in part.

"I'll look at other things but one of the things I would say is that if I felt that greater restrictions on law abiding citizens' gun ownership would make us safer and could comport with our Second Amendment rights I would be open to that too. But the fact is, the correlation is between rising gun ownership and declining rates of violent crime and murder in this country."

'Unredacted with Kurt Schlichter': It's Time to Enforce Law & Order