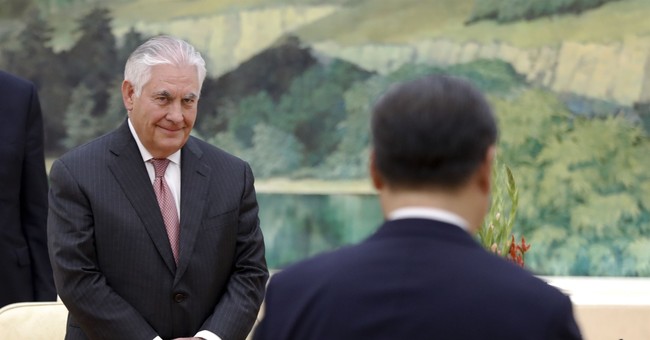 The question was understandably overshadowed by the tragedy in Las Vegas, but it was asked nonetheless. Does President Trump still have confidence in Secretary of State Rex Tillerson after he distanced himself on North Korea, the press asked Sarah Huckabee Sanders at Monday's White House press briefing.

She said yes, but Trump and Tillerson's conflicting tones on Kim Jong Un do not bode well for their relationship. Tillerson said last week that he was still pursuing diplomatic solutions with North Korea. The president told the world that his secretary of state is wasting his time.

I told Rex Tillerson, our wonderful Secretary of State, that he is wasting his time trying to negotiate with Little Rocket Man...

...Save your energy Rex, we'll do what has to be done!

At least he called him "wonderful." Then again, he also called HHS Secretary Tom Price a "good man" just a few hours before he handed in his resignation.

Politico contributors Aaron David Miller and Richard Sokolsky, both of whom worked at the State Department for years, wondered aloud whether Trump's public rebuke meant Tillerson's days at the White House were numbered. The editors cannot remember a time when a president so embarrassed his secretary of state.

North Korea's Kim Jong Un has felt emboldened to continue ballistic missile tests despite repeated U.S. warnings. In his strong and sometimes shocking speech at the United Nations General Assembly last month, Trump again called the dictator "Rocket Man" and warned him that military options are on the table. If the U.S. is forced to defend itself, she is prepared to "destroy" the rogue regime.