Spicer Insists He Never Lied in the Press Room 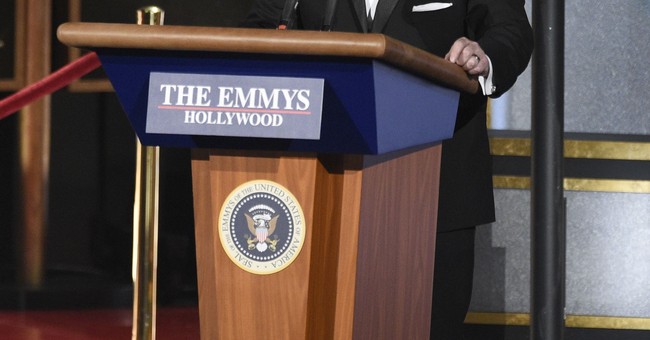 Liberals were incensed that The Emmys invited former White House Press Secretary Sean Spicer to the awards show for a brief cameo appearance. He burst on to the stage with his signature podium to poke fun at himself a bit, referencing that now infamous press conference he held the day after President Trump was inaugurated to lecture the media about how Trump had surpassed previous crowd size records.

"This was the largest audience to ever witness an inauguration. Period!" he said at the surprise presser.

He regrets his tone and the lack of specifics, but not much else.

When ABC's Paula Faris pressed him as to whether he had ever lied to the American people, he said, "I don't think so," and offered the following response to his critics.

“Look, I made mistakes. there’s no question. Some of them I tried to own very publicly, and in some cases there were things that I did that until someone brought it up, I said, ‘Gosh, I didn’t realize that was a mistake, I’m sorry about that.’ But to watch some of the personal attacks questioning what my intentions were, I think were really over the top.”

The former press secretary said he wishes he had been more "consistent" in terms of those narratives and asked for a "mulligan."

In the month since he's been removed from the White House, Spicer has been on the speaker circuit and has been offered some reality TV stunts. Yet, he is reportedly having a tough time finding a long term job due to a "lack of credibility." He rejects that charge.

Asked about those new reports that he may have information that may interest Special Counsel Robert Mueller in his Russia investigation, Spicer was extremely mum.