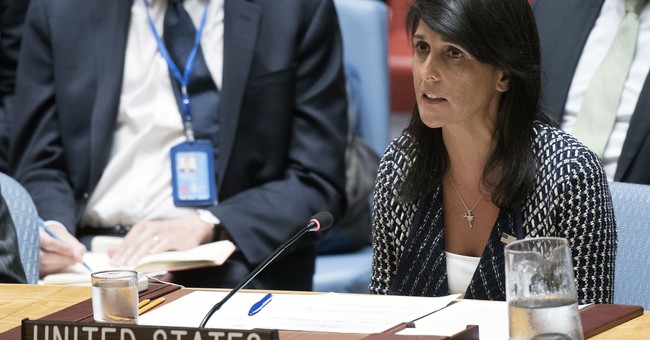 United Nations Ambassador Nikki Haley provided a long list of everything that has failed in responding to North Korea's aggression during the UN Security Council special meeting Monday. We are now sitting on 24 years of "half-measures and failed talks," she said.

"Enough is enough," she said. "We have taken an incremental approach and despite the best of intentions, it has not worked."

Haley continued to criticize the UN Security Council, which she said has often been "too slow and too weak" to respond to North Korea's missile tests. She also condemned countries that have failed to follow UN sanctions against North Korea and continue their trade practices.

President Trump has also said the U.S. will punish any country that continues to do business with North Korea.

Don't get her wrong. Diplomacy is her first resort. Yet, they are running out of patience.

.@nikkihaley: "War is never something the United States wants. We don't want it now. But our country's patience is not unlimited." pic.twitter.com/mPlZs7mKfv

Defense Secretary James Mattis is not one to mince words either. He recently warned North Korea that the U.S. is ready to enforce "massive annihilation."

"Any threat to the United States or its territories, including Guam, or our allies will be met with a massive military response, a response both effective and overwhelming," he said after an emergency meeting at the White House Sunday.

The North Korean threat became much more serious last month when our intelligence agencies learned that the regime now has the capability to place nuclear warheads on ICBMs.