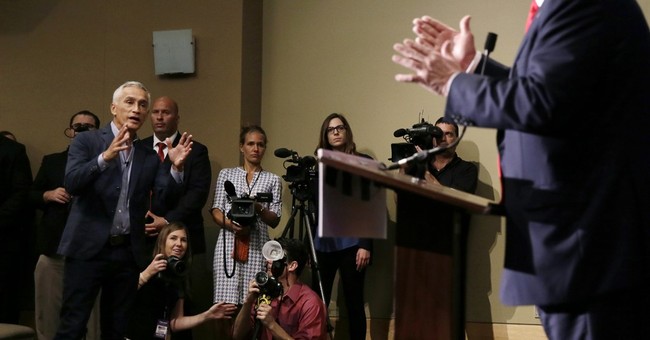 Emotions are high on cable news panels this weekend after President Trump decided to pardon Arizona Sheriff Joe Arpaio. Arpaio was convicted in July of disobeying a court order to stop detaining Latinos in Maricopa County. His critics accused him of abusing his power. However, Trump decided to pardon him Friday, declaring that the sheriff had done his duty and kept Arizona safe.

Plenty of Republicans joined liberals who were frustrated with the decision. House Speaker Paul Ryan disagreed with the pardon, as did Sen. John McCain (R-AZ).

.@POTUS's pardon of Joe Arpaio, who illegally profiled Latinos, undermines his claim for the respect of rule of law https://t.co/2FckGtwQ2m

Republican strategist Ana Navarro, never a fan of President Trump, excoriated him for "slapping the Latino community in the face." For most Latinos, Navarro explained on CNN Sunday, Arpaio is "a symbol  of racism." Trump is sending the wrong message to law enforcement as well, she added.

Univision anchor Jorge Ramos, who infamously sparred with Trump last year on the campaign trail over illegal immigration, seemed to be the most, judging by how he lashed out at his debate opponent Texas State Sen. Steve Montenegro during CNN's "State of the Union" Sunday.

Montenegro defended both Trump and Arpaio, arguing that the sheriff was a victim of "political persecution." Ramos, visibly frustrated, used Montenegro's last name to express his outrage at how he could possibly be on the wrong side of history.

"I find it disturbing and sad when an immigrant like you forgets where he comes from," Ramos said.

"You are turning your back on other immigrants," he added, before telling Montenegro he was siding with discrimination and a president who is "making racism something normal."

Montenegro calmly countered Ramos, noting that leftists like him refuse to use facts during debates. Instead, they resort to "personal attacks."

Progressives are demanding Trump be condemned for the pardon. One Democratic senator is even arguing that his action violates the oath of office.