"You're Not a Conservative": Flake Challenger Goes into Attack Mode 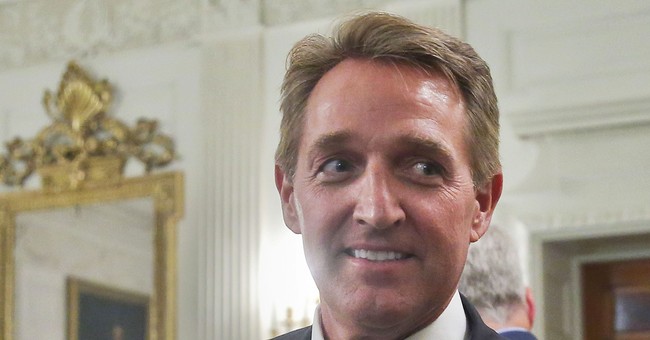 President Trump is holding a campaign-like rally in Phoenix, Arizona Tuesday night. He is expected to renew his calls for a border wall. However, some pundits predict he will also take the opportunity to single out one of his Republican critics, Sen. Jeff Flake, who has represented Arizona since 2013.

Trump's presence tonight will be a "headache" for Flake, the media is reporting.

Last but not least, Trump may step further into next year's Arizona Senate race by further tormenting one of his most outspoken Republican critics, the state's junior U.S. Senator Jeff Flake, and potentially upsetting the delicate balance of power in the Senate.

Dr. Kelli Ward is posing a challenge to Flake's re-election campaign. The conservative state senator and physician, who once challenged Sen. John McCain as well, released a new ad Tuesday, entitled, "Arizona Deserves Better." In it, Ward highlights the several instances in which Flake has criticized President Trump.

With these very public condemnations, Flake also wrote a secret book about the state of the Republican Party in which he shares his concern that President Trump has jeopardized the party's principles. He has also called out conservatives who refuse to publicly condemn Trump's rhetoric.

“I think that you know, obviously the last thing you want to do is wake up every morning and see a tweet and think, ‘I just' — you know, it’s tough not to just say, ‘I’m not going to respond.’ And we can’t respond to everything. But there are times when you have to stand up and say, ‘I’m sorry. This is wrong.’”

Trump, as you can imagine, is happy to support Flake's new opponent.

Will he reiterate at tonight's rally?