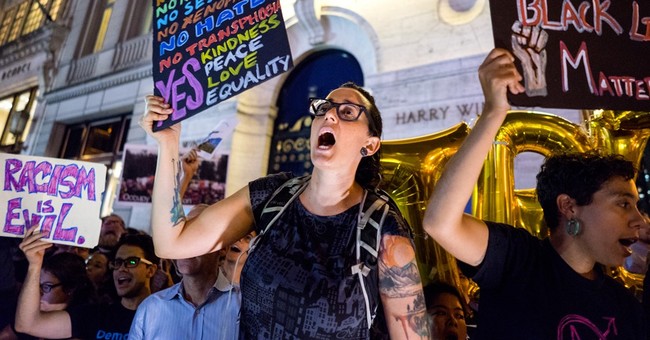 After this weekend’s tragic events in Charlottesville, VA, you’d think Americans would think twice before staging more hate-filled protests that too often lead to violence. Yet, the scene at New York City’s Trump Tower Tuesday night was just as shameful as ever. Six months into President Trump’s legitimate presidency, and he is still being greeted like this.

Presumably, these protesters are lashing out at the president for his first response to the Charlottesville tragedy. In his initial statement, Trump did not condemn white supremacy specifically. After backlash, he made himself much clearer in a statement directly from the White House, denouncing the KKK and white nationalism. Yet, judging by the scene in New York Monday night, his words do not appear not to have appeased his critics.

Trump wasn’t the only target last night. His supporters, including the men in this video who were holding a “Thank God for Trump” sign, were attacked with expletives. Apologies for the language, but just listen to the hate coming from this woman’s voice.

Leftists lose their minds over a "Thank God for Trump" sign. #TrumpTower pic.twitter.com/wbhg0087dM

The police, who were only trying to protect the protesters, were also not safe from the hate. One young woman was so incensed she called the officers Nazis. Check out this video from observers on the ground. (Again, language warning.)

Some social media users noted that these kinds of demonstrations will only fuel Trump to a second term. This madness does nothing for the progressive cause.

Police shouldn’t have to spend their precious time monitoring protests every single day and night. Why don’t we let them and the president do their jobs?

Trump appears to be doing just that. He tweeted that he is back in New York City for meetings on military purchases and trade.