Tapper to Sanders: Didn't Single Payer Fail in Your Own State? 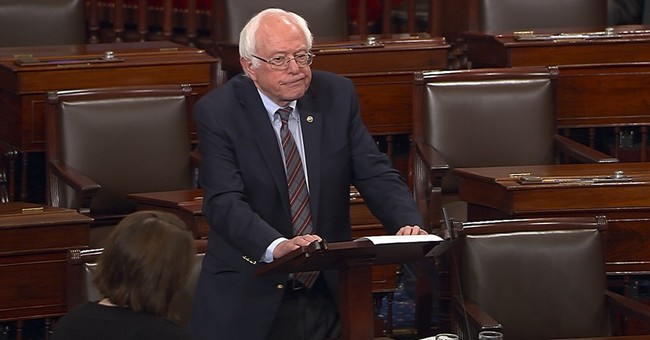 President Trump tweeted on Monday that Congress had better get that repeal and replace bill passed, or they can forget about those "bailouts" they enjoy, clearly frustrated that his party has so far failed to get any cohesion on this critical issue.

Sen. Bernie Sanders (I-VT), seeing the setbacks up close, has accused Trump and the GOP of trying to "sabotage" health care in America.

(Side note: did he forget the disaster caused by Obamacare?)

Anyway, after berating the president and the Republicans, Sanders offered his suggestion.

"Single payer would save the average family significant amounts of money," he said on CNN.

Host Jake Tapper was not so sure Sanders was the best salesman for single payer, reminding his guest that it didn't work in his own state.

“Why couldn’t this happen in Vermont, then?” Tapper asked. “What’s the issue in Vermont? Vermont would be a perfect test case.”

It sure would. Although the Vermont legislature passed single payer in 2011, they soon gave it up after it failed miserably. The governor admitted he couldn't pay for it.

Sanders, however, blamed the failure on politics.

“Politically this is difficult,” Sanders said. “Look, taking on the insurance companies and the drug companies, taking on Wall Street, taking on a lot of very powerful forces that make millions of dollars a year from the current health care system is not going to be easy.”

He went on to cite a few studies from Canada and the UK, noting that people pay "substantially less per capita." Of course, he left out the part where the health care systems in Europe can be awfully cruel. Charlie Gard, a baby who was dying from a rare disease, was forced to remain in the UK despite his parents' wishes to send him to the United States for experimental treatment. He died just a few days ago.

Still, Sanders and other liberals are gung ho about single payer.

Good luck. As Guy detailed earlier today, Democrats and progressives can't afford to tick off working class voters any more than they already have.