Fewer Conservatives Than Ever Trust Colleges to Teach 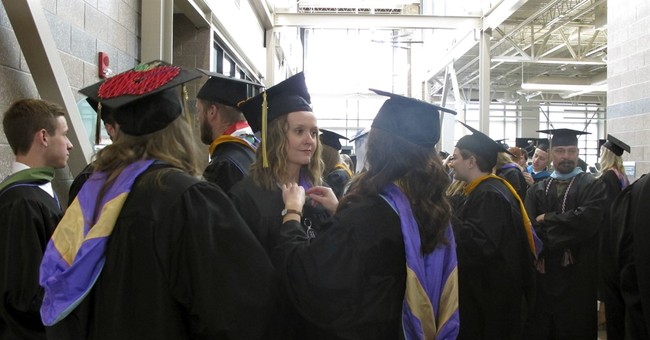 Conservatives have long had justifiable concerns with today’s colleges. Parents send their children to school, only to have them inundated with liberal lessons in the classroom and progressive events on campus. Commencement speakers with explicitly liberal ideologies outnumber conservatives by 4-to-1.

To put it bluntly, conservative ideals are demonized and conservatives have officially had it, at least according to a new Pew Research Center study.

This study makes even more sense when taking a look at the political breakdown of today's campuses. In a study of dozens of college faculty, the Econ Journal Watch found that professors clearly favored one party over the other.

We investigate the voter registration of faculty at 40 leading U.S. universities in the fields of Economics, History, Journalism/Communications, Law, and Psychology. We looked up 7,243 professors and found 3,623 to be registered Democratic and 314 Republican, for an overall D:R ratio of 11.5:1.

President Trump has done much to expose the liberal bias rampant in today’s universities. More than once this past year, a professor has been busted for spewing hate against the commander-in-chief. Orange Coast College Professor Olga Perez Stable Cox said Trump’s election was an “act of terrorism” and called the president "one of the most anti-gay humans in this country.”

“People are going to die because of what happened,” he told his students.

There are plenty more opinionated professors where they came from.

Roger Ream, president of the Fund for American Studies, said the culture needs to change – now.

“With the price of a college education skyrocketing and the landscape of the American economy rapidly changing, we must make sure that students are graduating with the ability to think critically and form nuanced opinions. That can’t happen if they only encounter one point of view. Students deserve to receive a balanced educational foundation and it’s the job of college administrators to ensure they do so.”