Lester Holt: Trump Made a 'Fair Point' About Dem Hypocrisy 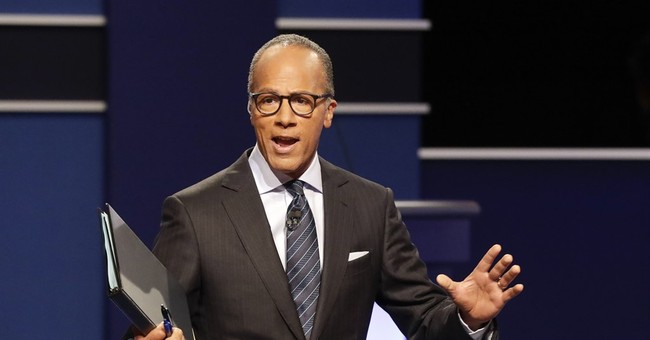 Those who tuned into Lester Holt's NBC News interview with President Trump this week were wondering what was on the piece of paper Trump handed to Holt at the outset of their conversation about his firing of FBI Director James Comey.

Holt revealed what was on the mysterious paper on the "Today" show Friday. Trump handed him a list of quotes from hypocritical Democrats now fuming over Comey's firing, but once could not wait to see him gone.

Holt had to admit that Trump made a pretty good point. While Democrats couldn't stand Comey when he reopened the email investigation into Hillary Clinton last year, they changed their minds about him when he began an investigation into Russia's meddling in the 2016 election.

"A few calling for his resignation, calling for his firing, being critical," he said. "There were about 20 quotes on here, but the president wanted me to have that. And it makes a fair point that a lot of Democrats were not happy with Comey either, many believing that he torpedoed Hillary Clinton's chances."

The Republican National Committee also highlighted Democrats' shameless flip flop in a new video, which reminds us that just a few months ago they called for Comey's firing.

Of course, the White House has not exactly been crystal clear either in regards to its feelings toward Comey. Trump praised Comey during the 2016 campaign, but now is accusing him of being a "showboat," and sending him Twitter threats.