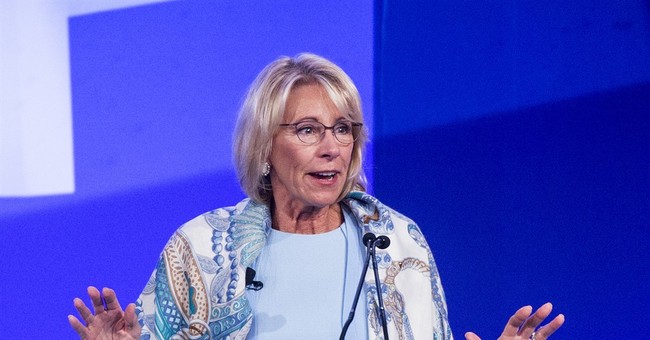 When Education Secretary Betsy DeVos was invited to give the keynote address at Bethune-Cookman University, a historically black college in Daytona Beach, Florida, she was not welcome with open arms. The Florida NAACP even demanded university officials resign over the invitation. DeVos received an even more disrespectful reception when she showed up at the school Wednesday.

BuzzFeed News reporter Molly Hensley-Clancy live tweeted the event, and the room got more and more brutal as the ceremony unfolded. A large number of graduates booed White House political aide Omarosa Manigault as she was being introduced, then gave the same courtesy to DeVos. Several graduates refused to even look at DeVos, turning their backs to her as she came onstage.

A large number of grads have their backs to DeVos now as she speaks. It's a little hard to hear her words. pic.twitter.com/yVXsqLVJQv

When DeVos came to the podium, her remarks were drowned out by a large chorus of boos.

A taste of the room right now pic.twitter.com/jGn3gHuwLM

Another student walked out giving the black power symbol, according to Hensley-Clancy.

Disrespectful to say the least.

Despite the boos, DeVos and Manigault have helped enact legislation that will protect Historically Black Colleges and Universities (HBCUs). President Trump signed an executive order in February to make HBCUs a priority of the White House.

Kudos to DeVos for not backing out of the speech after the initial backlash. She also gladly received an honorary degree from the school's administrators - with another background of boos of course.

Another kudos belongs to the school officials, who at least tried to rein in the disrespectful students.

"If this continues, your degrees will be mailed to you," the Bethune-Cookman President Edison Jackson said at one point.