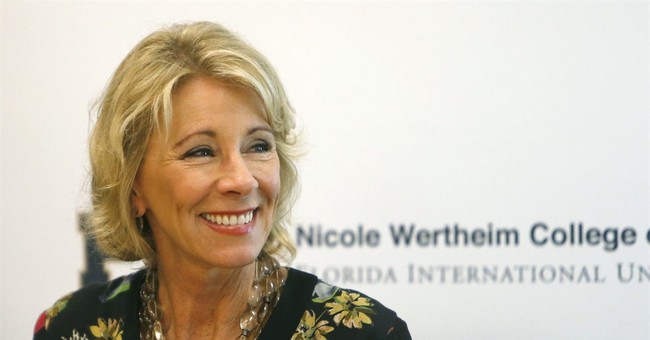 The Florida chapter of the NAACP demanded the resignation of two Bethune-Cookman University officials on Monday for inviting Education Secretary Betsy DeVos to be the school’s commencement speaker.

Nweze called the invitation to speak at the historically black university a “slap in the face.”

The decision to invite DeVos to speak at the school last Tuesday caused public outcry because of comments that she previously made calling historically black colleges and universities "real pioneers" of school choice.

DeVos later backtracked, saying that the schools weren't established to give black students more choices, but because black students were forbidden from attending white schools because of racial segregation.

"Multiple allegations have surfaced, including faculty intimidation demanding their silence or (risking) termination," Nweze said. "And (there were accusations of) threats to students by potentially withholding earned degrees and fines for freedom of expression."

Several attorneys have already agreed to represent faculty and students who peacefully protested DeVos' speech and who might face retaliation from the university, Nweze said.

"Our partners have reviewed the university student code of conduct, and it does not contain any prohibition on peaceful protests and freedom of expression," Nweze said. "The NAACP Volusia County Daytona Beach Branch and several attorneys will be on the ground monitoring this situation."

“The university leadership has drastically fumbled and should resign,” the NAACP leader added.

A statement announcing the commencement speaker said DeVos was like the founder of the university because she recognizes “the importance of opportunity and hope for students to receive an exceptional education experience.”

“The legacy of Dr. Bethune is that she was not constrained by political ideology, but worked across all parties to support B-CU,” explained B-CU President Dr. Edison O. Jackson.

In response to the NAACP, the school issued a statement recognizing the First Amendment rights of its students and faculty, but said they will “uphold existing policies and procedures to protect the integrity of our commencement exercises and will continue to do so during Secretary DeVos' visit.”

DeVos will speak at the university on Wednesday.