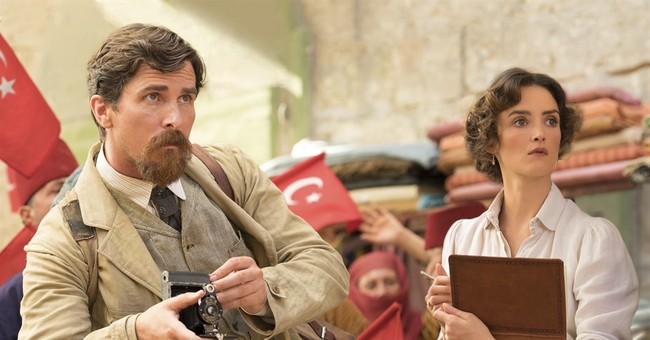 The Promise covers a largely underreported tragedy: The Armenian Genocide of the early 20th century. About 1.5 million Armenians were murdered between 1915 and 1918, during the Young Turks movement of the Ottoman Empire. Many people today do not know the extent of the massacre. Thanks to a dedicated crew and an A-list cast, the atrocity is now getting some attention in the Hollywood spotlight.

Director Terry George knows that genocide is not a popular topic in Hollywood, which thrives on sexy plots, but it is one that he is passionate about. His first blockbuster hit, Hotel Rwanda, centered on the Rwandan genocide of the 1990s. Like in that award-winning film, George manages to create a love story in the midst of the tragedy in The Promise. His fictional love triangle, comprised of Christian Bale (Batman Begins), Charlotte Le Bon, and Oscar Isaac (Star Wars: The Force Awakens), is conceived with the goal of attracting a broader audience.

Sharing George’s passion for the Armenian people is Executive Producer Ralph Winter. Winter, who lives in a large Armenian community, also happens to have a birthday that falls on the same day of the anniversary of the Armenian Genocide, April 24. With these personal connections, he already knew a little of the Armenians' tragic heritage before reading the script.

“We did struggle a little but settled on a love story as the best way to enter into the backdrop of World War I, as opposed to making it a war movie,” he explained to Townhall. “We wanted to tell it through the people that are inadvertently experiencing it.”

Winter admits the crew did worry how the love triangle plot would be received by the conservative Armenian community, who would frown on such promiscuity.

He and his fellow filmmakers sought to hit the “right tone that’s not offensive but illustrates that in those desperate times of war that there’s so many confusing emotions and feelings.” It’s a “tricky story to tell,” he added, “to resonate at every level.”

The Promise seemed to do just that at an early screening at the Capitol Visitor Center in Washington, D.C. Audible sobs – both from Armenian and non-Armenian audience goers – interrupted the film at several emotional moments – particularly during the scenes when families were ripped apart.

Winter hopes the film will prompt more recognition of the atrocity against the Armenian people and compel the international community to finally label it a genocide.

“It’s been sidelined as being a cultural thing,” Winter said. “Obama was willing at one point to say something but even he couldn’t follow through. It’s a painful story and I think this movie puts a face on this genocide and so there’s tangible things to look at.”

The word "genocide," Winter said, is so important because it’s “a recognition of the purposeful killing that took place, not just inadvertent war casualties.”

It comes with a sense of responsibility, he added, so he can see why Turkey avoids the term. Yet, the U.S. also has its reasons for avoiding the term – it could affect our relationship with NATO partners.

“It’s tricky to get our country to recognize it because it’s freighted with choices we have to make with a partner like Turkey, who’s in NATO and is aligned with the war effort in Afghanistan, Syria, and Iraq," Winter explained. "It implies responsibility, intent and purpose.”

The movie’s concluding sequence, in which Armenians flock to boats to escape the persecution, recalls the refugee plight of today, as Christian Bale remarked at a recent premiere, the film has an “unfortunate timeliness.”

“What’s shocking is that even as we are making the movie, the massacre scene in particular, we were recreating images we had seen the night before on The New York Times and the Wall Street Journal,” Winter recalled. “It was painful for the crew. They had to take a moment because it was overwhelming. Here we are, 100 years after this happened, recreating the same images of the little Syrian boy laying at the edge of the water. We had no idea what would be happening. But it is indicative that this kind of story will keep happening unless we engage the world community to do something. “

The Promise is in theaters Friday, April 21.