Spicer Asks Press Corps Why They're Arguing Over Dates, Not Substance in Investigations 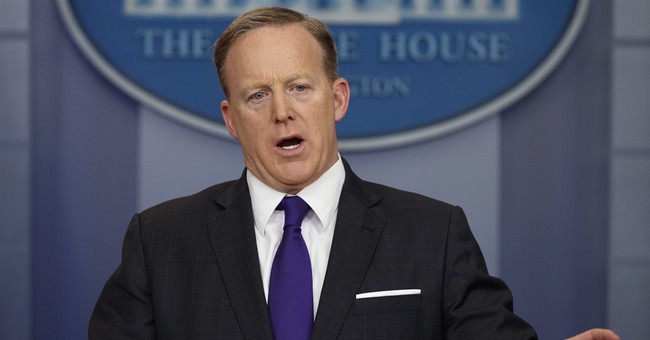 White House Press Secretary Sean Spicer engaged in (another) back and forth with CNN’s Jim Acosta on Friday over the investigation into reports that the Trump transition team had been placed under surveillance by Obama intelligence officials. Acosta pressed Spicer about what appears to be a shifting narrative in terms of Trump’s Twitter accusations. Why, he wondered, don't his initial accusations about wiretapping mesh with the White House's current arguments? Spicer berated him for zooming in on dates, when he should be focused on the substance.

“We’re arguing over the date, not the substance,” Spicer said, frustratedly.

What the press should be asking, Spicer said, is why the intelligence community was using resources to surveil Trump’s team, to unmask U.S. officials, and to spread classified information.

If we’re asking why pertinent revelations happened “on a Monday or a Tuesday,” we’ve lost focus, he said.

“It is fascinating to me that we are now arguing over the date, not the substance,” he continued. “American citizens potentially were surveilled. This is happening in this country. There is a concern people misused classified information and violated civil liberties. That should concern every single American.”

“The details matter,” Acosta insisted, before asking Spicer if he now has evidence that Trump was the target of surveillance.

The press secretary said not exactly, but the materials that he's seen will be provided to the House and Senate Intel committees looking into the matter and it will convince them "they should further their investigation."

Spicer also remarked on the investigation into Trump’s potential ties to Russian officials.

“There’s been no evidence” of those ties, Spicer said, pivoting to Hillary Clinton.

Clinton “failed to reset policy” with Russia when she was secretary of state, he said. Additionally, she personally called Vladimir Putin and the Obama administration sold uranium to Russia

“If you want to talk about a Russian connection, look to Hillary,” he said. “It is night and day.”

When asked about reports that former National Security Adviser Michael Flynn has offered to testify on the Russia investigation in exchange for immunity, Spicer said the president believes he should go testify.

The press secretary also denied that Flynn had incriminating information to share about the White House in his potential testimony.