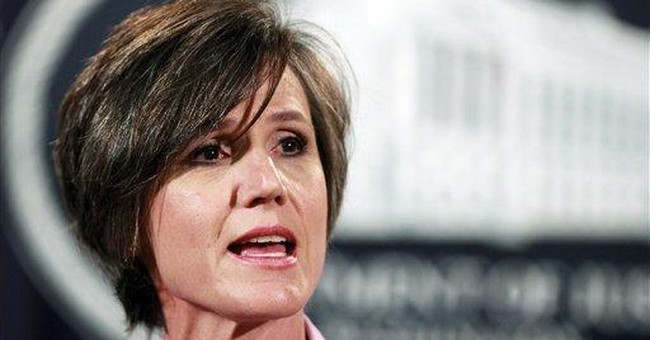 The Washington Post published a report on Tuesday suggesting that the White House had blocked former United States Deputy Attorney General Sally Yates from testifying on the Russia investigation. In particular, she was expected to share information she had in regards to what led to former National Security Advisor Michael Flynn’s resignation.

This report comes after House Intelligence Committee Chair Devin Nunes (R-CA) canceled a hearing where Yates, former CIA Director John Brennan and former DNI Director James Clapper were scheduled to testify. Democrats accused him of nixing the public hearing because of pressure from the White House. Their claim was offered some credence after Nunes admitted he was on White House grounds last week before his press conference on the committee's investigation.

The timing and the context are all very suspicious and many are demanding Nunes recuse himself from the investigation. He has no intention of doing that, responding to these demands with a why should I?

The White House has denied the new WaPo report as "entirely false."

White House statement in reaction to the Sally Yates story (via @kaitlancollins) pic.twitter.com/IkAsAeOt7Q