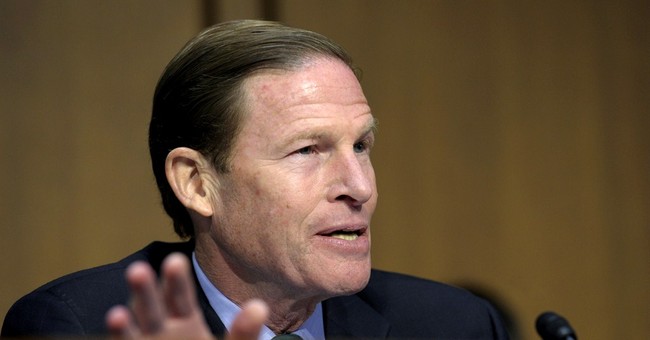 Sen. Richard Blumenthal (D-CT) seemingly wants President Trump’s Supreme Court nominees to be held to stricter standards than previous justices. In statements made over the weekend, the senator said he will not consider voting for Gorsuch until he distances himself from Trump's policy agenda.

“I want to see that this nominee disavows and in fact discards the litmus tests that Donald Trump has set, including that he overturn Roe v. Wade, that he be pro-gun, anti-gun violence prevention measures and that he be conservative,” he said over the weekend.

Leonard Leo, advisor to President Trump on the Supreme Court, called out Blumenthal for trying to compromise Gorsuch’s judicial independence.

"Senator Richard Blumenthal laid down a new far-reaching and dangerous rule for confirming US Supreme Court nominees--one that makes demands that truly jeopardize judicial independence," Leo said in a statement on Tuesday. "Trump Supreme Court nominees, he says, must provide more answers about how they will address issues and rule on cases in the future because Senator Blumenthal says that the President used litmus tests on conservative issues. What matters is what President Trump asked the Judge himself and what the Judge said, not the President's campaign trail comments, and the President never sought promises from the Judge on future cases and Judge Gorsuch never made any. Judge Gorsuch can't make these promises on how he might rule as a matter of judicial ethics, and I very much doubt he will."

All day Tuesday at his confirmation hearing before the Senate Judiciary Committee, Gorsuch reiterated the importance of remaining a nonpolitical judge, one whose only client is the law.

Blumenthal has also threatened to filibuster Gorsuch if he finds him to be out of the mainstream.

"If the Democrats won't give the President 60 votes for Neil Gorsuch, then there is no Republican Supreme Court Nominee they will ever support," Leo added.