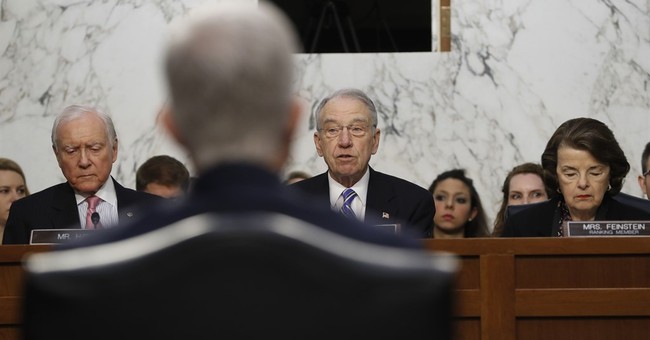 A day after sharing her unique view of our “evolving” Constitution, Sen. Dianne Feinstein (D-CA) wanted to know where Supreme Court nominee Neil Gorsuch stood on the issues of abortion and enhanced interrogation techniques on day two of his confirmation hearings. We don’t have much to go on regarding Gorsuch’s views on these hot button issues, so the senator hoped her line of questioning could bring them to light.

Gorsuch explained it would be inappropriate for him to offer his personal opinion of past cases because it would be unfair to future litigants. But, he did acknowledge that Roe “is a precedent” and has been reaffirmed many times.

“I would be tipping my hand at suggesting to litigants I’ve already made up my mind about their cases,” he explained.

Feinstein was not satisfied, wanting Gorsuch to confirm unequivocally that Roe v. Wade was the law, especially after President Trump said he’d appoint someone who’d overturn the court ruling.

“If anything has super precedent, Roe does,” she insisted. She asked Gorsuch directly whether he believed that to be true.

Gorsuch again acknowledged the case “has been reaffirmed many times.” He expanded on the importance of precedent in regards to court cases that center on controversial issues, explaining that it helps to settle once hotly contested issues and allows the courts to "move forward.”

Asked later by Sen. Lindsey Graham (R-SC) what Gorsuch would have done if Trump met privately with him and asked him to overrule Roe, the nominee said he "would've walked out the door."

Feinstein also wanted to know where the nominee stood on the use of torture. She cited an email of his which she says suggested he condoned waterboarding, the text of which has been circulated on Twitter.

Gorsuch argued he could not comment because he did not feel comfortable commenting on documents he had written over a decade ago and could not fully recollect.

He did note, however, that legislation like the Detainee Treatment Act bans cruel and degrading treatment and he would abide by it.