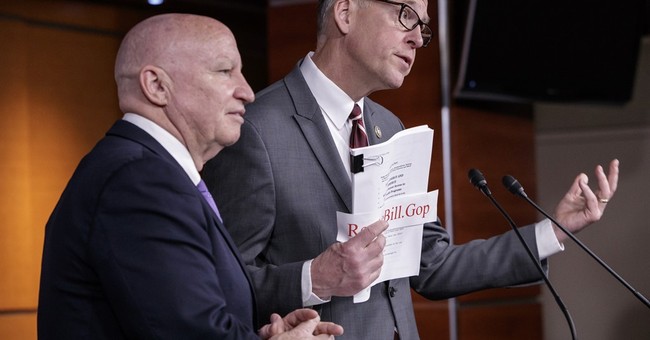 The White House has embraced the Republicans’ plan to repeal and replace Obamacare, the American Health Care Act. The conservative members of the House Freedom Caucus, however, remain unconvinced that the GOP’s plan is anything but Obamacare 2.0.

At a Capitol Hill press conference on Tuesday, Sen. Mike Lee (R-UT) argued the bill is a step in the wrong direction and a missed opportunity.

Rep. Greg Walden (R-OR), chairman of the House Energy and Commerce Committee, suggested those critiques are unfair. In a conversation with radio host Hugh Hewitt on Wednesday, he encouraged all Americans to read the full bill before passing judgment. When they do, they’ll discover it is a surefire way to strengthen the patient-doctor relationship.

“I believe it will get to the president’s desk, because once people have a chance to read the bill, and I’d encourage them to go to www.readthebill.gop, they’ll see what we’re doing here,” Walden said. “We protect the most vulnerable in our country, we do entitlement reform like never before, and we do, we get back to market principles.”

Yet, many conservatives believe they have justified concerns about the legislation. First, the language being used by the GOP leadership, such as “first step,” and “work in progress,” is not exactly reassuring. Furthermore, Hewitt pointed out that the CBO score on the bill has not been provided, nor the number of people who stand to lose their health insurance under the change.

Walden admitted they don’t have those estimates, but insisted all Republicans need to get behind the bill because if not it would be a waste of years of hard work.

"This is the repeal/replace vote the Republicans and conservatives are going to have," he said. "There isn’t another one."

The House Freedom Caucus disagrees and is ready to reintroduce the 2015 bill which completely repeals Obamacare. Once that is voted upon, they will introduce separate legislation to usher in a replacement.

House Speaker Paul Ryan believes it won’t come to that. He’s confident the American Health Care Act will get the votes it needs to progress.