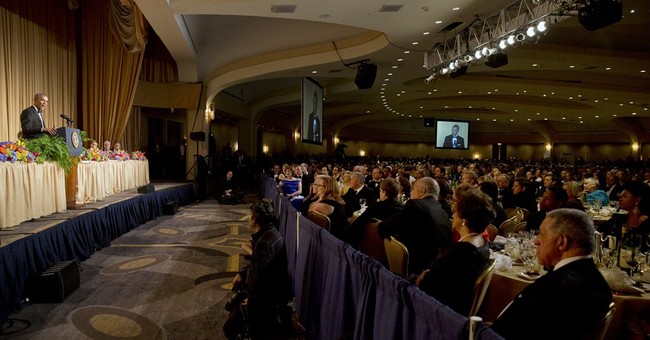 The annual White House Correspondents Dinner is an evening for journalists to eat and enjoy one another's company while being the butt of some lighthearted jokes. Presidents have taken the opportunity in years past to poke some fun at the media who cover the administration. With Donald Trump in the White House this year, however, many reporters were unsure whether they want to attend, considering his jokes may not be jokes at all.

Outlets dedicated whole pages analyzing whether they should attend this year and media outlets like The New Yorker and Bloomberg cancelled their parties. The latter is perhaps not a surprise after Michael Bloomberg called Trump a "dangerous demagogue" in July.

Some of the media's fears may have been allayed on Saturday after Trump said he would not be attending.

I will not be attending the White House Correspondents' Association Dinner this year. Please wish everyone well and have a great evening!

The last time Trump did attend the dinner, he was a key roast subject for President Obama.

Will the president's absence convince the press it's safe to accept their invitations and take their seats at their assigned tables?

Maxine Waters Just Set Off a Nuke with Her Chauvin Remarks...and a Lot of Democrats Are Furious
Townhall
If the Minneapolis Star Tribune wanted to get the Derek Chauvin trial jurors killed, what would they be doing differently?
Twitchy
It Happened: Derek Chauvin Trial Jurors Now Partially Doxxed as They Deliberate on a Verdict
Redstate
The Morning Briefing: I've Known Maxine Waters Is Evil for a Very Long Time
PJ Media