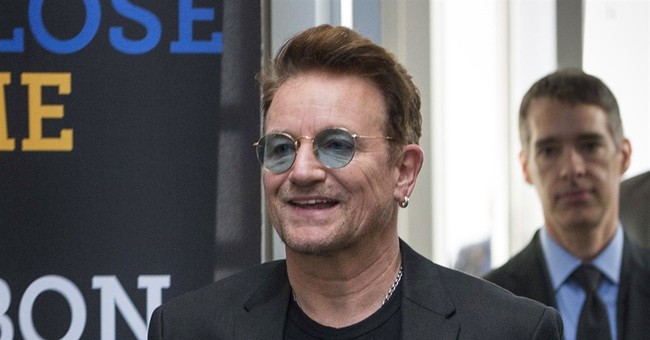 U2 frontman Bono has a history of standing up for causes he believes in - even if that means befriending Republicans. In the early 2000s, he worked with President George W. Bush to enact the President’s Emergency Plan for AIDS Relief bill to confront the AIDS crisis. He gave Bush credit for helping save over 10 million lives in Africa thanks to the legislation.

He is one of few celebrities who happily worked with the Republican president instead of mocking and delegitimizing him every time they got in front of a camera.

Fast forward several years and Bono is boldly praising another member of a Republican administration. We already know he's no fan of President Trump, but when Bono bumped into Vice President Mike Pence at the Munich Security Conference over the weekend, cameras caught the rock star thanking Pence for his supporting PEPFAR in Congress.

“Twice on the House floor, you defended that,” Bono told him. “That’s how we know you. And we really appreciate it.”

Pence returned the compliment, noting that Bono was instrumental in pursuing the "extraordinary historic accomplishment."

That's how we know Bono is the real deal. He's not afraid to give credit where it's due - even when it's directed toward typically liberal targets.