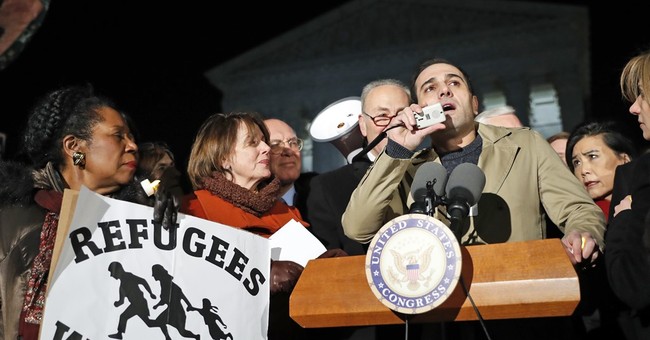 Democratic leaders Chuck Schumer and Nancy Pelosi tried to lead a rally in front of the Supreme Court Monday night to condemn President Trump's executive order on immigration, which they refer to as a "Muslim ban." Over a thousand protesters came to hear what the Congress members had to say, but unfortunately the mic temporarily stopped working.

President Trump saw an opportunity so he jumped on Twitter and mocked the Democrats for their technical difficulty.

“The mic briefly didn’t work, but this thin-skinned President clearly heard the voices of more than 250 Members of Congress and thousands of others who gathered outside the Supreme Court last night," Pelosi spokesman Drew Hammill said on Tuesday. "The President’s immoral executive order is clearly unconstitutional - no matter how many times he tweets or how many Administration officials he fires.”

The crowd on Monday did their best to avoid any awkward silence during the microphone failure by singing “This Land is Your Land.”