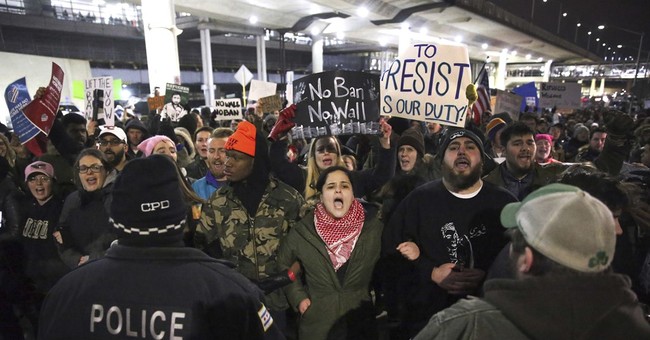 Protests have erupted at airports around the U.S., and civil rights groups have showed up in court in hopes of defeating President Trump's executive order that bans refugees from seven Middle Eastern and African nations. A federal judge issued a stay in the ACLU's legal challenge on Saturday, mandating that no detainee could be immediately deported.

The activists saw it as a win, yet in a statement on Sunday the Department of Homeland Security said it plans to implement the president's plan in full.

“The president’s Executive Orders remain in place—prohibited travel will remain prohibited, and the U.S. government retains its right to revoke visas at any time if required for national security or public safety,” the department said in a statement. “The president’s Executive Order affects a minor portion of international travelers, and is a first step towards reestablishing control over America's borders and national security.”

Those passengers that were "inconvenienced," by the order, the DHS said, were few and far between.

Passions were especially high in New York. Not only did taxi drivers stage a strike in defiance of Trump's actions, but over at John F. Kennedy International airport, hundreds showed up to demand the release of detainees, chanting "let them in!" Similar scenes arose in Dulles International airport in Virginia. Several travelers were eventually released from both airports.