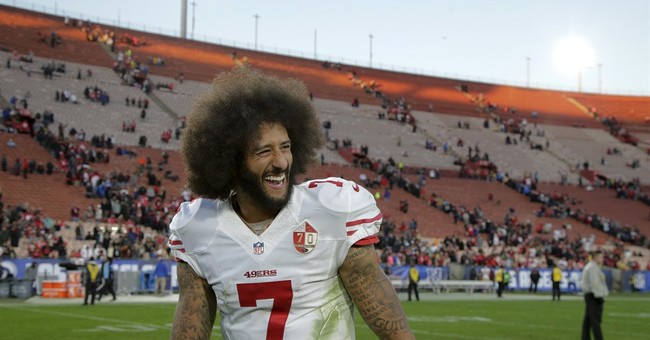 The Len Eshmont Award is unique to the San Francisco 49ers. It is voted on by the players and is given to the teammate who "best exemplifies the inspirational and courageous play of Len Eshmont, an original member of the 1946 49ers team,” according to the team website.

This year, the team chose to give it to...Colin Kaepernick. The quarterback made the controversial decision to take a knee during the playing of the national anthem over the summer. He said it was his way of protesting police brutality. Football fans responded to his performance by booing him mercilessly for the rest of the season, seeing his act as less as free speech and more as a form of disrespect to those wear a uniform and fight to protect our freedoms.

In addition to his poor sportsmanship, Kaepernick doesn't have much to boast of on the field. The 49ers currently have an abysmal 2-13 record.

Some are also blaming him for the NFL's tanking ratings this past year.

At least he can end his poor year with an award he probably doesn't deserve.