Berlin Suspect ID'd as Tunisian Refugee, Politicians Accuse Merkel of Having 'Blood On Her Hands' 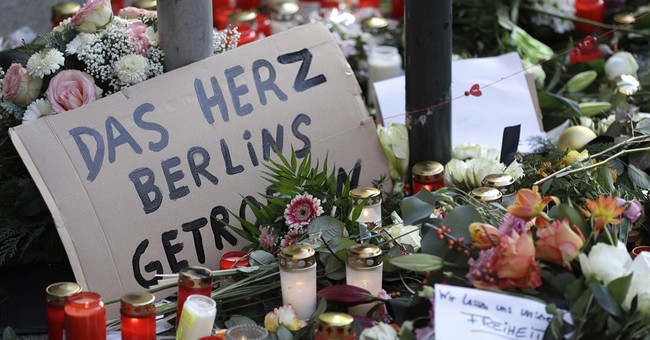 Berlin authorities have searched the truck that plowed into innocent bystanders in a Christmas market on Monday and found an identity document presumably belonging to the driver. The document ID's him as "Anis A," born in 1992 in Tataouine, Tunisia. Police are now on a manhunt to find him.

Twelve people died and 48 others were injured in Monday's attack. On the following day, the Islamic State claimed responsibility for the carnage.

German Chancellor Angela Merkel gave the green light for thousands of refugees to seek asylum in the country. A million refugees from the Middle East and Africa have arrived at Germany's door step in just the past few years. After several terror attacks, some politicians, like Dutch politician Geert Wilders, are accusing Merkel of having blood on her hands.

Uh Oh: Democrats are Bleeding Support with One of Their Key Voting Blocs
Matt Vespa
Fired Brooklyn Center City Manager Speaks Out After Calling for Officer Who Shot Wright to Have Due Process
Julio Rosas