Obama: My Vision Will Win in the Long Term 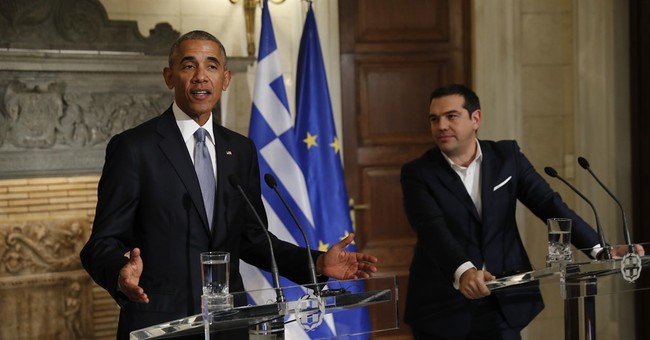 President Obama offered his thoughts on the U.S. presidential election for the third time during his last international tour as president. Speaking in Athens, Greece with Greek Prime Minister Alexis Tsipras on Tuesday, Obama sought to defend his legacy despite the American people choosing Donald Trump to succeed him.

“Last I checked, a majority agree with me on things,” Obama said. “Sometimes people feel as just we want to try something to see if we can shake things up. That was a significant phenomenon.”

The president said that we are going to have to “guard against a rise in a crude sort of nationalism or ethnic identity or tribalism that is built around us and them.”

Obama said he will “never apologize” for saying that the future of humanity is going to be defined by what we have in common, as opposed to those things that separate us and lead us into conflict.

Americans, he continued, know what happens when we divide ourselves along the lines of race or ethnicity or religion. It’s “dangerous,” he said, not just for the minority groups, but because we don’t realize our potential as a country when we’re preventing minorities like blacks or Latinos from “fully participating in the project of building American life.”

“So my vision’s right on that issue,” he concluded. “It may not always win the day in the short term, but I’m confident it’ll win the day over the long term.”

The president has noticeably changed his rhetoric since Trump’s victory. As recent as September, Obama told voters that if they don’t show up to vote for the Democratic ticket, it would be an “insult” to his legacy.