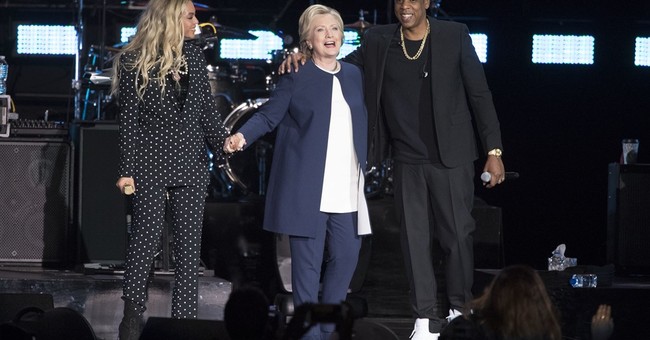 At last night's Hillary Clinton rally in Cleveland, Ohio, rapper Jay Z sang some of his signature songs - and that means he dropped several n-words and f bombs. Here was just a taste of what the crowd heard. (Warning: graphic language.)

Donald Trump, at his own rally in Tampa, Florida on Saturday, used Jay Z's appearance to prove his opponent was a hypocrite. Why, he wondered, does Clinton balk at his rhetoric, but stays silent when a rapper says much worse at her own rally?

“He used language last night that was so bad, and then Hillary said, ‘I did not like Donald Trump’s lewd language,’ ” Trump said.

“My lewd language. I’ll tell you what, I’ve never said what he said in my life.”

The Republican nominee was also happy to point out that Clinton needed rock stars to get just 10,000 people to show up to her event. Meanwhile, Trump alone drew 27,000 people to his rally in Hershey, PA Friday night.

"We don't need Jay-Z to fill up arenas."