'Stay Tuned': Pence Says Evidence Is Coming That Will Exonerate Trump From Allegations 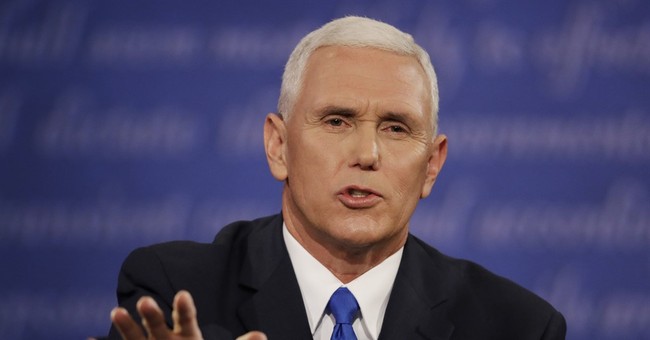 Gov. Mike Pence is standing by GOP nominee Donald Trump amid those nasty sexual assault allegations. The New York Times published a piece on Wednesday giving voice to two women who claim Trump groped them several years ago. He dismissed the claims (and the Times in general) during a campaign rally on Thursday and said he and his team of attorneys were moving forward with a lawsuit.

It's apparently more than just talk. On CBS' "This Morning" on Friday, Pence told the anchors to "stay tuned" for evidence that will exonerate the Republican nominee.

“Before the day is out, [there will] be more evidence publicly that shows and calls into question these latest allegations,” he said.

“Stay tuned. I know that there’s more information that’s going to be coming out that’ll back his claim that this is all categorically false,” Mr. Pence said.

Since The Washington Post released the shocking audio recording and voters heard Trump bragging about making sexual advances on women, he has unsurprisingly suffered in the polls. It even led to him offering a rare apology. Pence himself, who is an evangelical Christian, was reportedly torn about whether he wanted to stay on in the campaign. Yet, after Trump's strong debate performance last Sunday, the governor decided to stay put.

For Pence to mention the "evidence" on TV, he must be pretty confident that the content is enough to put this latest scandal behind them.