RBG Is Not a Kaepernick Fan 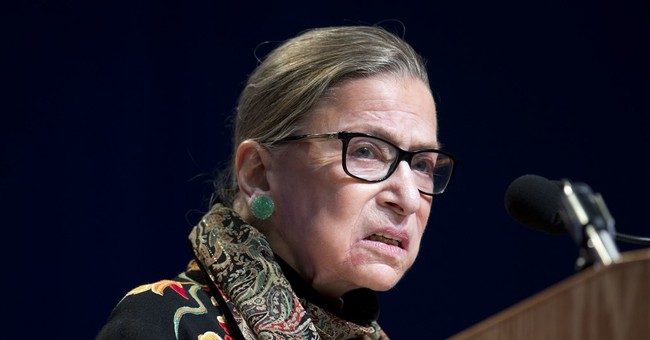 Ruth Bader Ginsburg may have differed from her late colleague Antonin Scalia on countless policy issues, but one thing they had in common is that they were not afraid to speak their minds. The latest case in point: Ginsburg had no problem telling Yahoo!'s Katie Couric just what she thinks about NFL quarterback Colin Kaepernick's on-field protests during the national anthem.

When asked by Couric how she feels about San Francisco 49ers quarterback Colin Kaepernick, and others athletes, refusing to stand for the anthem, Ginsburg replied, “I think it’s really dumb of them.”

“Would I arrest them for doing it? No,” Ginsburg elaborated. “I think it’s dumb and disrespectful. I would have the same answer if you asked me about flag burning. I think it’s a terrible thing to do, but I wouldn’t lock a person up for doing it. I would point out how ridiculous it seems to me to do such an act.”

When pressed by Couric, Ginsburg did concede that Kaepernick's decision to take a knee at his NFL games is well within his First Amendment rights. Yet, she reminded Couric that it was "stupid."

Fun fact: The "Notorious RBG" nickname is sticking around. I saw one student wearing a T-shirt here with that endearment at Washington University ahead of Sunday night's presidential debate.