Obama Meets With Netanyahu For Last Time in Office, Says He Wants to Help Israel Find Path to Peace 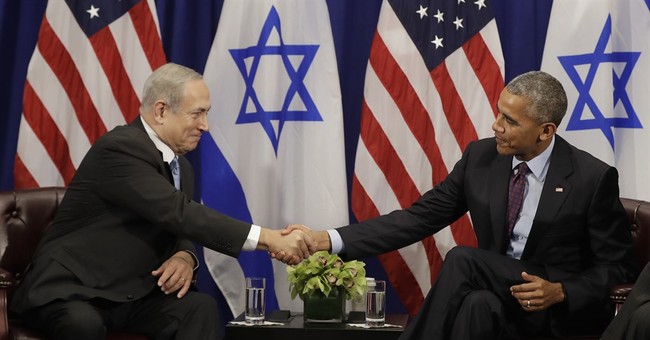 It appears hostility was kept to a minimum during President Obama's final meeting with Israeli Prime Minister Benjamin Netanyahu at the United Nations General Assembly on Wednesday.

The two spoke to reporters before their discussion, with Obama sharing his hope that the United States can continue to help Israel find a "path to peace" with their Palestinian neighbors. The White House recently backed up that pledge with a very generous $38 billion aid package to Israel to boost their defenses. Netanyahu thanked the president for the financial help.

Obama has long called for a two-state solution for Israel and Palestine, but Netanyahu has often delayed that option, claiming Israel has the right to the settlements in question.

Despite their well known disagreement on the best outcome, their meeting was very cordial, with Netanyahu even telling Obama he is always a "welcome guest" in Israel.