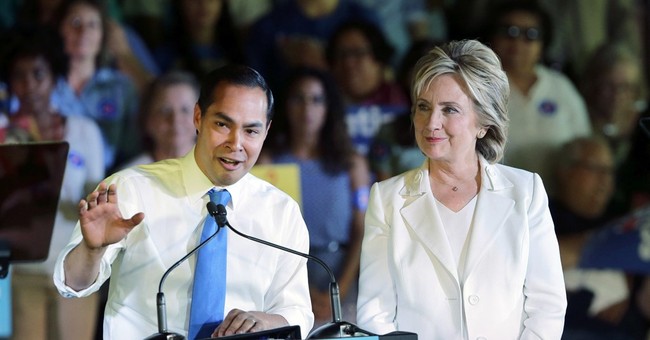 Considering RNC coverage has dominated headlines, you may not have heard the report that one of Hillary Clinton’s potential vice presidential picks, Housing and Urban Development Secretary Julian Castro, likely violated the Hatch Act during an interview with Yahoo!’s Katie Couric in April. The Hatch Act prohibits federal employees from weighing in on politics while serving in their posts. Yet, during Castro’s conversation with Couric, he couldn’t help expressing his support for Democratic presidential candidate Hillary Clinton. The U.S. Office of Special Counsel (OSC) concluded his remarks went a bit too far.

“Secretary Castro’s statements during the interview impermissibly mixed his personal political views with official agency business, despite his efforts to clarify that some answers were being given in his personal capacity,” the OSC report said.

Castro sent a letter to President Obama acknowledging his mistake, yet noting it was not intentional and that he tried to make clear he was “not acting in his official capacity” during the interview.

Now, a watchdog group called the Foundation for Accountability and Civic Trust (FACT) is reminding Castro about a letter they sent him in January, months before his Katie Couric gaffe, clearly warning him about the Hatch Act.

“The purpose of our letter is to alert you to potential liabilities associated with your recent political activities,” the memo reads.

“As a senior executive officer of the Executive Branch, general principles of the Standards of Ethical Conduct apply to you and how you conduct yourself, your staff, and your agencies. In particular, even the appearance of political partisanship is strongly discouraged.”

Matthew Whitaker, the executive director of FACT, released the following statement on Tuesday, arguing that the policies he’s championed prove Castro has placed his political career goals ahead of Americans’ best interests.

“What’s most disturbing in this case is that a month after the Couric interview, Secretary Castro announced changes to a HUD program in an apparent effort to improve his viability as a potential vice presidential candidate," Whitaker said. "Making changes to agency programs and initiatives based on political calculations and expediency, instead of real need, is both a serious violation of federal law and a breach of the public’s trust.  The OSC report confirms Secretary Castro’s reckless disregard for the rule of law, which only further puts the integrity of our government in serious jeopardy.”