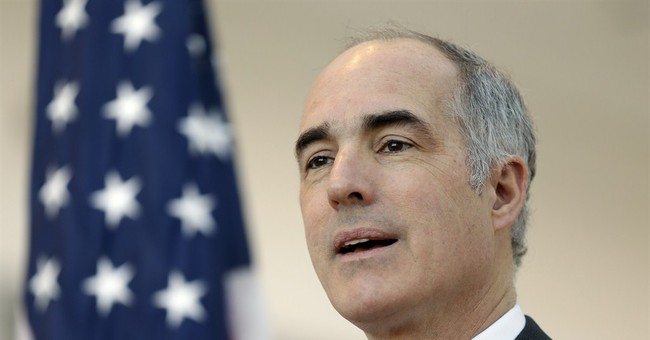 We already know Sen. Joe Manchin (D-WV) thinks his party is crazy for adopting a new platform that may just be their most radical pro-abortion draft yet. The newest platform opposes the Hyde Amendment, which prevents taxpayers from having to fund abortions.

The Hyde Amendment is common sense legislation that has garnered bipartisan support since the 1970s, notes The Hill. Yet, thanks to a far left Democratic platform committee, the party is now apparently totally OK with forcing Americans to pay for something with which they may morally disagree.

Sen. Bob Casey (D-PA) took Manchin's lead and criticized his party for allowing such a radical platform to proceed.

“This is a consensus-based policy that has, for many years, prohibited the use of federal funds to pay for abortion,” Casey wrote in a letter sent Friday to the platform committee and obtained by The Hill.

He said the Hyde Amendment recognizes “that many Americans remain morally opposed to abortion, and do not wish to see their tax dollars go to pay for abortion.”

Yet, like the DNC committee, presumptive Democratic nominee Hillary Clinton is campaigning to repeal Hyde, telling Planned Parenthood as much earlier this year.

Americans, however, have indicated they are opposed to having to foot the bill for abortions. The Knights of Columbus conducted a study last year that found 68 percent of those surveyed were against it. Democrats especially won't like what one key demographic had to say - millennials opposed it by 71 percent to 28 percent.

How can Clinton hope to defend such an extreme position?

The pro-life group Susan B. Anthony List is urging other Democratic senators who have previously stood up for life like Joe Donnelly, Heidi Heitkamp, and Tim Kaine, who is rumored to be one of Clinton's VP choices, to come out against the new DNC platform. President Marjorie Dannenfelser offered this statement on Monday:

“Senators Bob Casey, Joe Donnelly, Tim Kaine, and Heidi Heitkamp have all previously stood up for the conscience rights of taxpayers, in support of the Hyde Amendment," Dannenfelser said. "Will they defend the principles they have stood up for in the past, or submit to the national party apparatus, beholden to the abortion lobby? They cannot claim to be pro-life if they support forcing Americans nationwide to be complicit in abortions through their tax dollars. This is a gross violation of conscience rights.”