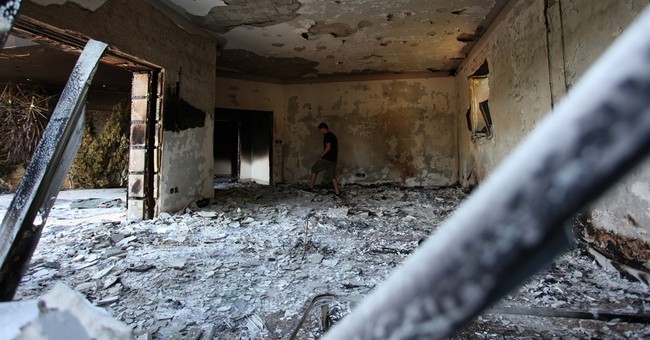 For some reason, the Obama administration was having a debate over apparel while Americans were fighting for their lives in Benghazi, Libya. Rep. Mike Pompeo (R-KS), a member of the House Select Committee on Benghazi, revealed as much to radio host Hugh Hewitt Tuesday morning before the committee released its final report.

Combat Marines were ordered in and out of uniform four times before finally launching their rescue effort, Pompeo explained. Apparently the State Department was worried about optics.

“The State Department didn’t want it to look like it was an invasion of Libya,” he said. “They were hypersensitive to looking like there were Americans coming into Libya when this was truly a terrorist haven. Somehow, they had this idea that a big American force in uniform would present some risk that the Libyans would protest, because we were invading their country. In fact, the military folks knew that that wasn’t going to help keep our soldiers safe. And there was this debate back and forth about what the appropriate attire was for going to rescue Americans while our embassy was burning and mortars were falling in Benghazi.”

Is this why our soldiers were left stranded on the roofs of the CIA annex in Benghazi for hours?

In the midst of this maddening discussion, Secretary of State Hillary Clinton should have been there demanding less talk and more action. Yet, Pompeo emphasized what we found out in the committee’s final report.

“There is no evidence that at any time did she do what a leader would do that night,” he said.

He came to one conclusion: “Secretary Clinton put politics ahead of the Americans in Benghazi.”

For more on how the Obama administration failed to protect our soldiers and then manipulated the truth, read Rep. Pompeo’s narrative on the tragedy, coauthored by Rep. Jim Jordan (R-OH).

The members of the Benghazi committee will be holding a press conference to discuss their findings Tuesday at 10 a.m.