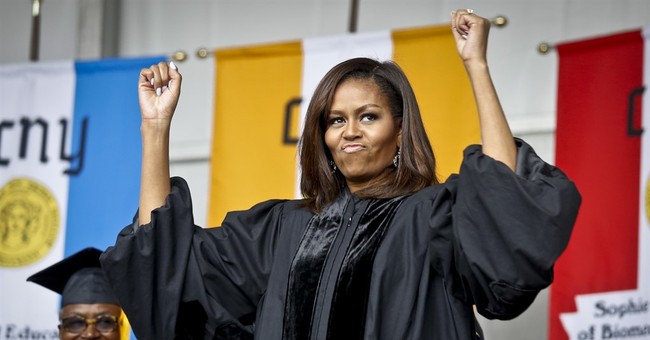 Washington, D.C. - First Lady Michelle Obama spoke with Oprah Winfrey at the first-ever White House State of Women summit on Tuesday night. Among the topics were how women can empower themselves - particularly in the workplace.

Mrs. Obama said she once walked into a boss's office and demanded full-time pay. She didn't however, see it as being brave, she just saw as "not being taken advantage of."

She also revealed what the journey as First Lady has been.

At first, Mrs. Obama said she thought her husband was crazy for wanting to be president. She wanted him to "chill" and find something else to do with his life. Yet, as First Lady, she noted she has been able to use her platform to change people’s lives.

“People can smell inauthenticity,” she said. “I want people to know me.”

She used her passion to help take care of veterans, she pointed out, and opened up the White House to all Americans.

Winfrey prodded Mrs. Obama to admit that sometimes she looks in the mirror and just feels good about herself. The First Lady admitted as such and at some point in this conversation the discussion devolved into their gushing about the president’s swag.

“He’s got the swag!” Winfrey said.

Her husband will be the same person walking out of the White House as he was walking in, she insisted.

As for the First Lady's gait, when she walks out of the White House, she wants to just walk back into a normal life.

“I want to sit in a yard that is not a national park,” she said. “I want to go to Target.”