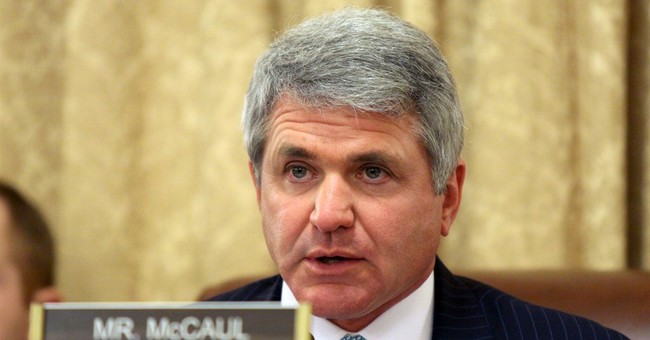 Hours after the doomed EgyptAir flight 804 disappeared on Thursday, House Homeland Security Chairman Michael McCaul spoke on the issue of national security at George Washington University. With the new tragedy in context, McCaul described the unfortunate state of affairs in our fight against terrorism. The president is wrong when he says ISIS is on the run, the chairman insisted. “They are on the march.”

McCaul issued the same warning in his appearance on Fox News Sunday this weekend.

“Is the White House not getting it?” host John Roberts asked.

“I don’t think the president’s got it from the beginning of ISIS,” McCaul said.

Not only is the president’s language misleading, the chairman noted, but his policies - or lack thereof - have left regions vulnerable to terrorism. Libya, McCaul explained, is “a failed state and becoming a launching pad for terrorism,” while other external operations are being conducted from a record number terrorist safe havens.

In the instance of EgyptAir, which has not yet been confirmed to be the result of terrorism but seems like the ever likely conclusion, McCaul remarked on the inept status of Cairo’s airport security. The facility is “very vulnerable” to inside and outside threats, he said, specifically pointing out that the airport has no full body scanners and intruders can easily get past magnetometers.

The incident has demanded the need to bolster aviation security in the U.S. Yet, McCaul described how he and his colleagues’ efforts are being ignored. Two bills that could bolster airport security are currently just sitting in the Senate, he said. This legislation, the chairman said, could assist airlines with equipment, etc. Moreover, McCaul has introduced the SAFE Act to properly vet refugees, but it got nowhere thanks to the president's veto.

“Aviation security is the biggest threat,” he continued, and the country is on higher alert than pre-9/11. “We now have a new generation of terrorists using the internet” to recruit people to their cause. The terror cell has managed to recruit 40,000 foreign fighters.

While McCaul insists on tighter national security, he stops short at a temporary ban on Muslims from entering the U.S., as presumptive GOP nominee Donald Trump has suggested.

“I don’t think you can ban an entire population,” he said. Instead, he said we must focus on specific threats and ramp up our vetting process. He went on to say an outright ban on the Muslim community would "cause a backlash" and would help with terrorist recruiting efforts.

Homeland Security Secretary Jeh Johnson was also a guest on Fox News Sunday. Asked to respond to McCaul’s assessment of the president’s failed leadership, Johnson said the chairman was “right to be concerned” about airports in the region.