Obama in UK: I'm Not Here to 'Fix Any Votes' on EU Referendum 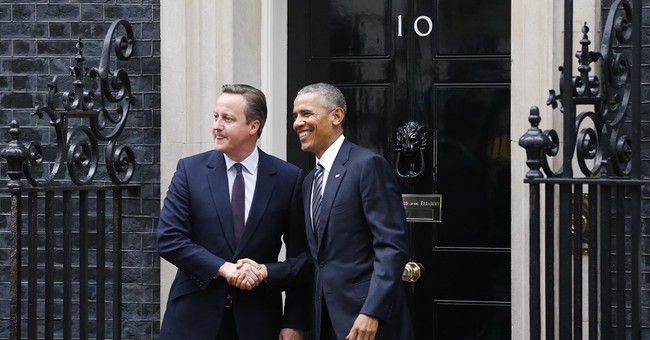 President Obama is in England this week, both to mark Queen Elizabeth II’s 90th birthday and to discuss the “Brexit” controversy with Prime Minister David Cameron.

Before addressing the elephant in the room, however, Obama and Cameron addressed the fight against terror and refugee crisis at a London press conference on Friday. Iraqi security forces are steadily pushing Daesh (ISIL) out of crucial territories, the UK leader noted.

Europe is also succeeding in its efforts to deal with the migration crisis, Cameron said. “We’ve maintained our borders and will continue to do so,” he insisted.

Obama followed Cameron’s remarks to note the special friendship between our two nations and determination to work together to make the world “safer and better.”

Then, not able to avoid the topic any longer, Obama said he and Cameron spoke about the referendum over whether the United Kingdom should leave the European Union. The UK, Obama said matter-of-factly, should remain in the EU.

“It’s something the British voters have to decide for themselves,” he said. Yet, “speaking honestly,” he said the outcome is of “deep interest” to the U.S.

The UK is “at its best” when it helps to lead Europe, he continued. It “strengthens prosperity” through the EU and is therefore “good for America.”

When the two world leaders concluded their opening statements, an ITV reporter noted the “controversial timing” of Obama’s EU announcement. Does he still think it was the right decision to intervene in the debate? the journalist wondered.

“This is a decision for the people of the UK to make,” the president repeated. “I’m not coming here to fix any votes. I’m offering my opinion. In democracies, everyone should want more information, not less.”

Some leaders like London Mayor Boris Johnson have criticized Obama for seemingly sticking his nose into British affairs. He wrote a scathing op-ed in The Daily Telegraph slamming the president’s “hypocritical” argument.

"For the United States to tell us in the U.K. that we must surrender control of so much of our democracy is a breathtaking example of the principle of do-as-I-say-but-not-as-I-do," he wrote.

The latest polls show the majority of Brits want to stay in the EU.